Does A Professor's Scholarly Productivity Decline With Age?

Inside Higher Ed, Productivity: Age Is Just a Number: 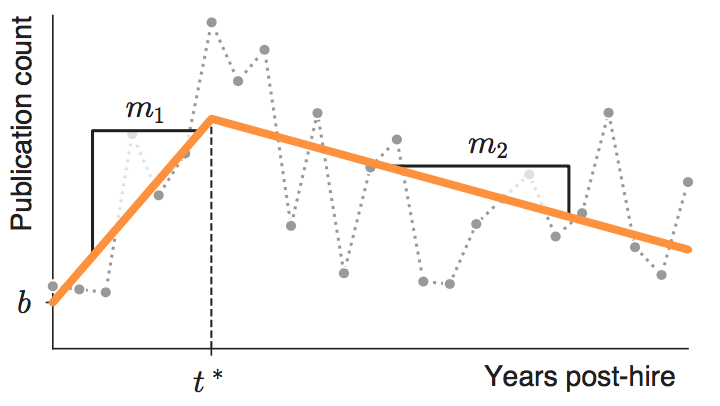 “Despite the persistent conventional narrative and expectations about productivity, individual people have incredibly diverse careers,” said Samuel Way, a postdoctoral research associate in computer science at the University of Colorado at Boulder and the paper’s lead author. “This is a cautionary tale to administrators and other people in power in the sciences as to why they shouldn’t expect everyone’s career trajectory to look the exact same way.”

The majority of academics who don’t fit the mold “aren't errors, they’re people,” he added.

Way said the finding has implications for hiring and funding decisions and tenure and retirement policies. If only a fraction of academics — approximately 20 percent in the study — peak in productivity early in their careers, faculty search committees might do well to look beyond younger, prolific candidates, for example. Institutions, meanwhile, might worry less about older professors delaying retirement. ...

The Misleading Narrative of the Canonical Faculty Productivity Trajectory was published online Tuesday in the Proceedings of the National Academy of Sciences. Way’s co-authors are Boulder computer science colleagues Allison C. Morgan, a Ph.D. candidate, and Aaron Clauset and Daniel B. Larremore, both assistant professors.

While past studies have “firmly established that the conventional academic productivity narrative is equally descriptive across fields and time, their analyses are based on averages over hundreds or thousands of individuals,” reads the paper. “This raises two crucial and previously unanswered questions: Is this average trajectory representative of individual faculty, and how much diversity is hidden by a focus on a central tendency over a population?”

A real scholar is someone who has the internal compulsion to write, research and analyze complex matters and it does not disappear once tenure is granted. It is not something that you do because you have to because of external requirements or benefits but because your mind has no real alternative. In my experience too many law school professors do OK under the external compulsion to obtain tenure and lifetime job security but are not "natural" driven scholars who must write because they would be incomplete otherwise. So there is often a drop off after job security is gained. But I also know a fair number of people who are real scholars and not simply dilettantes occupying extremely comfortable positions where it is too easy to find other things to do. One problem is that it is pretty much impossible to identify real, compulsive scholars in hiring entry level law faculty as opposed to laterals with a track record.

What Mike said. Also note that ALL of the data points posttenure are still above the pretenure lows, undermining the deadweight theory and suggesting that normal expectations are distorted by the "tenure push."

Mike, you are a breath of fresh air.

Quantity yes, quality no. I can barely read the stuff I wrote when I was young. It depends what you're looking for.