Crossroads Cincinnati: What Would Jesus Disrupt? 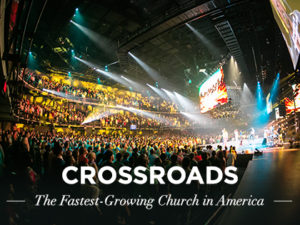 Crossroads, our former church in Cincinnati, has been named the fastest growing church and the fourth largest church in America.  Bloomberg Businessweek published a fascinating article about the church a few months ago, What Would Jesus Disrupt?:

For two days, the crowd sits in darkness in plush theater seats, watching the church stage. There are smoke machines and LED screens, harnessed climbers scaling a scaffold “mountain” and raising their arms in symbolic victory over the startup world’s arduous climb. There’s talk of destiny-defining “exits.” Of Jesus and his disciples: “The most successful startup in history!” Of the parable of the talents, in which two servants are lauded by their master for turning a profit with money he staked them: “The first recorded instance of venture capital and investment banking in history!” Of ancient business elites: “A church is the oldest marketplace in the history of the world.” Of the promised land of angel investing, where divinely inspired entrepreneurs dwell: “Because God creates things, too!” Mark Burnett, the producer of The Apprentice and Shark Tank, shows up to remind everyone that “the Bible is full of merchants and people doing work.”

At last, near the end of Unpolished 2015, a faith and entrepreneurship conference hosted by Crossroads, an evangelical church in Cincinnati, the marquee event begins: the final round of a pitch contest. Organizers have selected three prospective company founders out of more than 100 entrants, each of whom submitted a minute-long video pitch deck. ...

At the end of the aisles, attendants await, holding pails overflowing with packets of apple seeds. “God’s placed a seed in you. And he wants to see it come to fruitfulness,” [Brian Tome, Crossroads’ senior pastor,] says to the crowd, his spiked and styled dirty-blond hair and untucked plaid shirt lending him the air of an aging film star. Bowing his head, he prays, asking God to lead everyone to “the right seed that will bring forth the right fruit at the right time in every business.”

It’s a remarkable altar call: Those who feel inspired are to take these seeds from the attendants and go forth, claiming their spiritual destinies …  as entrepreneurs. ...

Named the fastest-growing church in America in 2015, Crossroads has been described by the Cincinnati Business Courier as both an entrepreneurial church and a church for entrepreneurs. Indeed, it was originally a startup—or more accurately an unofficial spinoff from Procter & Gamble Co., the $65 billion conglomerate based downtown, a few freeway exits south of the main church. In 1990, Brian Wells, a brand manager for Clearasil, started a singles Bible study with a P&G power couple, Vivienne Lee Bechtold, then a brand manager in beauty care, and Jim Bechtold, a marketing executive. The group, which met at the Bechtolds’ home, quickly grew to more than 100 people. Eventually the singles started marrying and having children, and Jim Bechtold asked Wells one morning, while the two carpooled to work, whether it made sense to start a church.

Over the next few months, a core of 11 people, some of whom had helped build billion-dollar consumer brands, reimagined church as one might expect P&G executives to do. (The company more or less invented brand management, and it’s been a prime breeding ground for business talent—Microsoft ex-CEO Steve Ballmer, Intuit’s Scott Cook, HP’s Meg Whitman, and GE’s Jeffrey Immelt, among many others, are all P&G alumni.) They gathered demographic data on Cincinnatians’ churchgoing habits, with a focus on the city’s affluent east side, which includes the P&G enclave suburbs of Hyde Park and Oakley. They scoured secular popular music and TV comedies for tips on how to keep churchgoers’ attention. They settled on a target demographic, 25- to 35-year-old males, figuring that if they could get the guy, they would get his wife. They wrote brand positioning statements—a church for friends who don’t like church; a church for people who’ve given up on church. Finally they built a slide deck featuring a mix of data and Scripture and began raising money from friends, family, and business connections.

In the spring of 1996, Tome led Crossroads’ first official service, speaking before more than 450 people at a rented auditorium in a local junior high school. Five years later, its rolls swelling, the church purchased a vacant big-box store, using the homes of some senior leaders as collateral. Crossroads spent millions converting the space into a 3,500-seat auditorium with two balcony tiers and enough stage lights to rival a Broadway theater. Today, the church has nine locations in the greater Cincinnati area (with another opening soon), some 30,000 congregants, an annual operating budget of $33 million, and a staff of 274 people, many with ties to P&G.

Among the employees is a 75-person “experience team,” the equivalent of an in-house advertising agency, whose branding efforts encompass direct-marketing campaigns, in-church clicker surveys, and customized stage sets aligned with sermon themes. The church also has a labs division—essentially a two-person market-research team led by a corporate brand ethnographer. Its eight satellite churches operate almost as franchises, all of them mirroring the main branch’s tailored signage and other brand imagery. Congregants all watch the same sermons, which are telecast from the main church to the satellites with a brief delay. Crossroads is even in the mergers-and-acquisitions game, having lately acquired (its officials prefer the term “adopted”) a church in Lexington, Ky., with 2,500 members and four locations.

In recent years, Crossroads’ version of the prosperity gospel has begun to borrow from Silicon Valley’s. The church included the pitch contest at Unpolished 2015, its inaugural entrepreneurship conference, and that same year some of its members created a for-profit angel-investment wing, Ocean Capital, and the nonprofit Ocean Accelerator Inc., whose mandate is to “increase God’s presence in the marketplace.” Ocean Capital’s first fund, of $230,000, was seeded entirely by six Crossroads members.

Ocean Accelerator got an early boost from Crossroads’ annual Beans & Rice Week, when congregants forgo regular meals in favor of beans and rice, then donate the savings to the church. Traditionally, the money goes mainly to fighting the city’s homelessness and heroin epidemics, but in 2015 the church put $120,000 toward the accelerator, a significant share of the program’s operating expenses. Selected entrepreneurs would embark on five-month residencies, and each startup would receive $25,000 from Ocean Capital. (The amount rose to $35,000 in 2016 and $50,000 in 2017.) Also included were free office space and access to dozens of spiritual and business mentors from the church’s membership rolls, a who’s who of Cincinnati’s — and America’s — corporate elite. ...

In his sermons, Tome, the senior pastor, frequently mentions job growth and lionizes entrepreneurs. “A business endeavor is close to the heart of God and every bit as important as anything else on God’s green earth,” he recently preached. Sitting in the church lobby a few weeks later, he describes entrepreneurship as an ancient practice with Biblical roots. Jesus constantly used business metaphors in his parables, he says, and founded the “first multinational corporate entity.”