Council of Economic Advisers: Reducing Corporate Tax Rate From 35% To 20% Would Increase Household Income By $4,000/Year 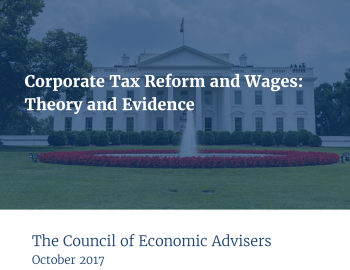 Wage growth in America has stagnated. Over the past eight years, the real median wage in the U.S. rose by an average of six-tenths of a percent per year. But even as Americans’ real wages stagnated, real corporate profits soared, increasing by an average of 11 percent per year. The relationship between corporate profits and worker compensation broke down in the late 1980s. Prior to 1990, worker wages rose by more than 1 percent for every 1 percent increase in corporate profits. From 1990-2016, the pass-through to workers was only 0.6 percent, and looking most recently, from 2008-2016, only 0.3 percent.1 The profits of U.S. multinationals are still American profits, but, increasingly, the benefits of those profits do not accrue to U.S. workers.

The deteriorating relationship between wages of American workers and U.S. corporate profits reflects the state of international tax competition. The problem is not unique to America; countries around the world have responded to the international flow of capital by cutting their corporate tax rates to attract capital back from other countries. They have doubled down on such policies as they have seen business-friendly policies benefit workers. This analysis from the Council of Economic Advisers reviews the evidence that has driven other developed countries to pursue the path of lower corporate tax rates and estimates how business tax reform in the Unified Framework for Fixing Our Broken Tax Code2 (hereafter, the “Unified Framework”) is expected to affect wages for American workers.

Reducing the statutory federal corporate tax rate from 35 to 20 percent would, the analysis below suggests, increase average household income in the United States by, very conservatively, $4,000 annually. The increases recur each year, and the estimated total value of corporate tax reform for the average U.S. household is therefore substantially higher than $4,000. Moreover, the broad range of results in the literature suggest that over a decade, this effect could be much larger. 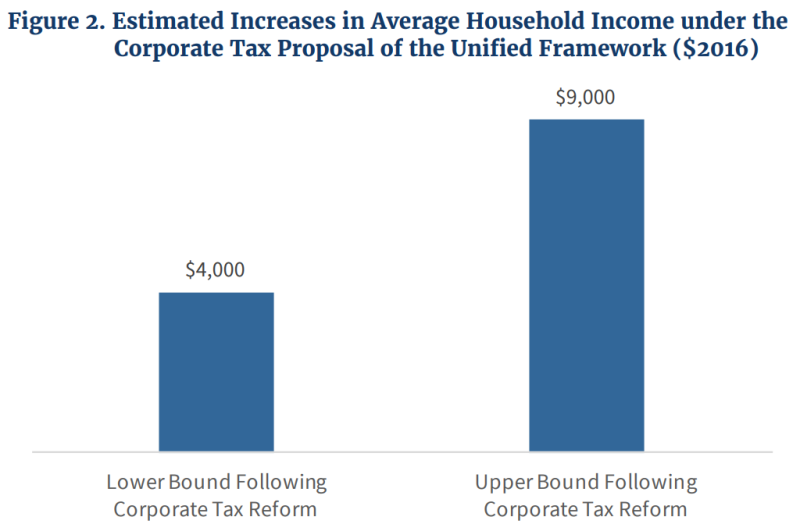 These conclusions are driven by empirical patterns that are highly visible in the data, in addition to an extensive peer-reviewed research. While much of the academic literature predates the latest data, the covariation between the trajectory of inflation-adjusted wages and statutory corporate tax rates (Federal and sub-Federal) between the most-taxed and least-taxed developed countries (OECD) over recent years, visible in Figure 1, is indicative of these papers’ findings. Between 2012 and 2016, the 10 lowest corporate tax countries of the OECD had corporate tax rates 13.9 percentage points lower than the 10 highest corporate tax countries, about the same scale as the reduction currently under consideration in the U.S. The average wage growth in the low tax countries has been dramatically higher, as would have been predicted by a consumer of the academic literature, which looks at much longer time periods and explores the relationship with modern econometric techniques.

This sizable empirical literature measures the relationship between wages and corporate taxes, controlling for other variables that may affect wage growth across countries and over time. The literature suggests the relationship between corporate taxes and wages is more than observational and is econometrically robust. The remainder of this report explains the theory and the empirical regularities that relate lower business tax rates – such as those in the Unified Framework – to higher wages and uses these estimates to measure the likely wage effects of the business tax reforms of the Unified Framework.