Virtually all the deans of law schools in California, of ABA-accredited and California-accredited schools, have come out in favor, at multiple stages, of lowering the cut score for the California bar exam. The score, 144, is the second-highest in the country and has long been this high. ...

The State Bar, in a narrowly-divided 6-5 vote, recommended three options to the California Supreme Court: keep the score; lower it to 141.1; or lower it to 139. ... The Court could adopt none of these options, but I imagine it would be inclined to adopt a recommended standard, and probably the lowest standard at that, 139. ...

The chart below illustrates a very rough projection of the improvement in performance of each school from the July 2016 bar exam if the score had been lowered to 139. ... 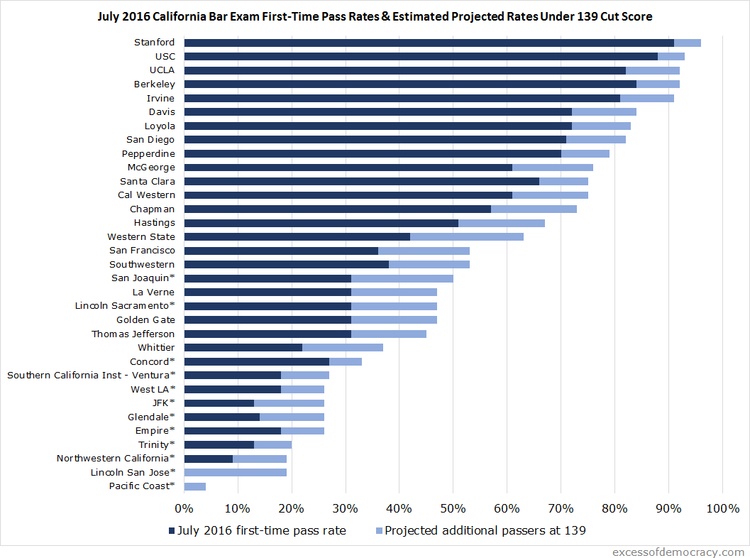 As you can see, in that middle band of 12 schools, those between Cal Western and Whittier, we would expect to see gains ranging from 14 to 21 points. The 11 schools at the top of the chart would generally see more modest gains of around 8 to 12 points. The 10 schools at the bottom of the chart would also see more modest improvement, typically 6 to 11 points. (The asterisks on the chart are notations for California schools that are not accredited by the American Bar Association.) There are over 50 law schools in California, but not all had sufficient test-takers to be reported in the California data.

What might these factors do to legal education in California? Potentially, quite a bit. I sketch out some possible outcomes—with an emphasis on their potentiality. A change from 144 to 139 is somewhat modest but, in a state as large as California with as many law schools and lawyers, could have significant effects. Here are a few possible things that could occur: ...