I have a new article entitled Net Tuition Trends by LSAT Category from 2010 to 2014 with Thoughts on Variable Return on Investment that is forthcoming in the Autumn issue of the Journal of Legal Education. I am very grateful for the research grant I received from Access Group (now AccessLex Institute) to support this project.  Here is the abstract:

The “macro” discussion of legal education highlights that law school is expensive. This general point fails to highlight the extent to which differences exist at a “micro” level due both to geography and LSAT profile. First, some regions of the country are more expensive than others. Second, where one is on the LSAT distribution profile influences the average net tuition because of scholarship patterns associated with institutional efforts to preserve or improve ranking. As a result, law school is not equally expensive across the entire LSAT distribution.

This article begins in Section I by briefly summarizing the geographic differences in tuition, which are not insignificant. Then, in Section II, this article briefly describes a dynamic net tuition model I developed for calculating net tuition trends by LSAT category and describes the results of that dynamic net tuition model. The results demonstrate that the variability of average net tuition by LSAT category increased significantly between 2010 and 2014 after accounting for inflation, with two LSAT categories seeing increases of 9.1% and 11.9% and four seeing decreases ranging from 2.8% to 13%. Section III looks at various outcome measures—specifically, bar passage rates, “bad news” employment outcomes, and imputed average first-year income—and demonstrates that, on average, the short-term return on investment varies significantly depending upon where someone is in the LSAT distribution. Section IV concludes with some thoughts on what this might mean for prospective law students and for law schools. 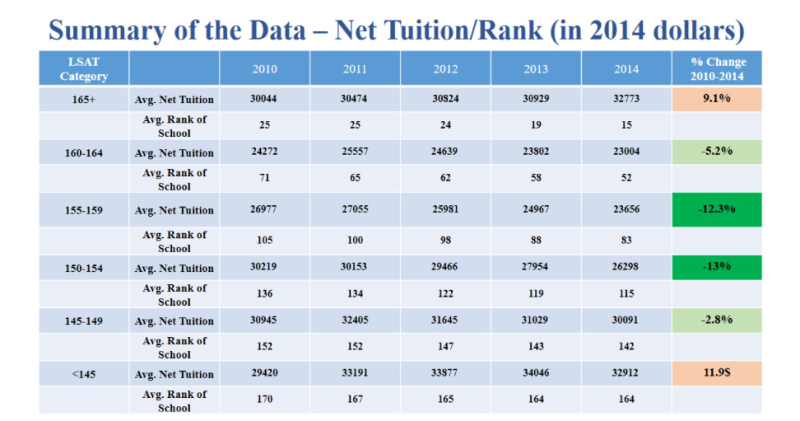 ABA Journal, JDs From Middle-Ranked Schools in States With Many Public Colleges May Give Best Investment Return