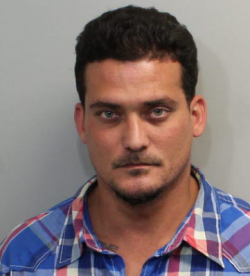 The former cellmate told investigators that Garcia, 35, said “he did not believe he himself could be saved” during a January conversation in which he opened up about the July 2014 murder, according to court records obtained by the Tallahassee Democrat. ...

While they worked out, the conversation turned to religion and salvation. The former inmate said Garcia told him he was facing the death penalty for a murder he was paid to carry out.

Garcia, who has pleaded not guilty, is one of three people who have been charged with the daytime shooting of Markel, a Florida State University law professor and internationally known legal scholar.

The mother of his two children, Katherine Magbanua, also awaits trial on first-degree murder charges in the capital case.

She is accused of being the conduit between Garcia, his accomplice Luis Rivera, and the family of Markel’s former in-laws who investigators suspect financed the murder. ..

In October, Rivera pleaded guilty to second-degree murder. His statement, which he provided in exchange for a 19-year prison sentence that runs concurrently with a 12-year federal term he already was serving, led to Magbanua's arrest.

The inmate’s statements are consistent with information other cellmates of Garcia’s have brought to investigators and with what Rivera revealed.