This paper examines whether people in academia portray and judge women and men differently in everyday “conversations” that take place online. I combine methods from text mining, machine learning and econometrics to study the existence and extent of gender stereotyping on Economics Job Market Rumors forum. Through a topic analysis, I find that the discourse tends to become significantly less academic or professional oriented, and more about personal information and physical appearance when women are mentioned. The words with the strongest predictive power on gender, selected by the Lasso-logistic model, provide a direct look into the gender stereotyping language on this forum. Moreover, a panel data analysis reveals the state dependence between the content of posts within a thread. In particular, if women are mentioned previously in a thread, the topic is likely to shift from academic to personal. Finally, I restrict the analysis to discussions on specific economists, and find that high-profile female economists tend to receive more attention on EJMR than their male counterparts. 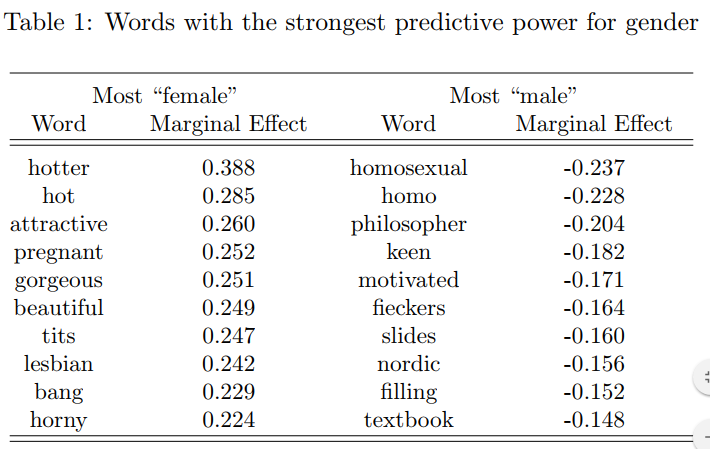 New York Times, Evidence of a Toxic Environment for Women in Economics:

A pathbreaking new study of online conversations among economists describes and quantifies a workplace culture that appears to amount to outright hostility toward women in parts of the economics profession.

Alice H. Wu, who will start her doctoral studies at Harvard next year, completed the research in an award-winning senior thesis at the University of California, Berkeley. Her paper has been making the rounds among leading economists this summer, and prompting urgent conversations.

David Card, an eminent economist at Berkeley who was Ms. Wu’s thesis adviser, told me that she had produced “a very disturbing report.”

The underrepresentation of women in top university economics departments is already well documented, but it has been difficult to evaluate claims about workplace culture because objectionable conversations rarely occur in the open. Whispered asides at the water cooler are hard to observe, much less measure.

But the intersection of two technological shifts has opened up new avenues for research. First, many “water cooler” conversations have migrated online, leaving behind a computerized archive. In addition, machine-learning techniques have been adapted to explore patterns in large bodies of text, and as a result, it’s now possible to quantify the tenor of that kind of gossip. ...

If there’s an optimistic story to be told about the future of economics, Ms. Wu may well represent it. It’s unusual for a senior thesis to have this sort of impact, but she is no ordinary young economist. At only 22, she also defies the stereotype that women are reluctant mathematicians and coders, as her analysis shows her to be adept at both. Professor Card described her as “an extraordinary student.”

She is also tenacious, and when I asked Ms. Wu whether the sexism she documented had led her to reconsider pursuing a career in economics, she said that it had not. “You see those bad things happen and you want to prove yourself,” she said.

Indeed, she told me that her research suggests “that more women should be in this field changing the landscape.”

Given the words identified as "most male" compared to "most female" it would seem online conversation is more anti male than anti female.