Tax Law And Social Norms In Mandatory Palestine And Israel 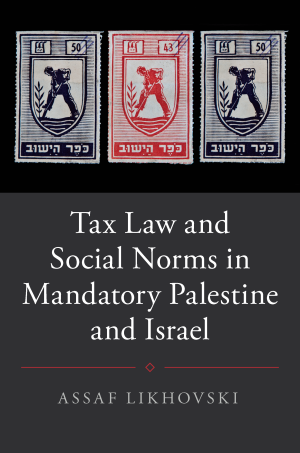 This book describes how a social-norms model of taxation rose and fell in British-ruled Palestine and the State of Israel in the mid-twentieth century. Such a model, in which non-legal means were used to foster compliance, appeared in the tax system created by the Jewish community in 1940s Palestine and was later adopted by the new Israeli state in the 1950s. It gradually disappeared in subsequent decades as law and its agents, lawyers and accountants, came to play a larger role in the process of taxation. By describing the historical interplay between formal and informal tools for creating compliance, Tax Law and Social Norms in Mandatory Palestine and Israel sheds new light on our understanding of the relationship between law and other methods of social control, and reveals the complex links between taxation and citizenship.

This brilliant book tells the story of how tax law in Mandatory Palestine was transformed from an intimate institution relying on the voluntary cooperation of taxpayers to a formal system enforced by lawyers. It is a must-read for anyone interested in the nature of law and in how to make a legal system that necessarily depends on voluntary cooperation achieve its goals.
Reuven Avi-Yonah, Irwin I. Cohn Professor of Law, University of Michigan

Assaf Likhovski has written a fascinating account of the development of taxation in a region that has long struggled with shifting rulers and divided populations. This book is more than just the definitive history of taxation in Israel. It is a case study on the cultural and sociological underpinnings of tax law itself.
Steve Bank, University of California, Los Angeles