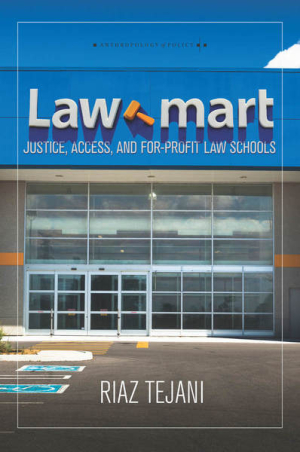 American law schools are in deep crisis. Enrollment is down, student loan debt is up, and the profession's supply of high-paying jobs is shrinking. Meanwhile, thousands of graduates remain underemployed while the legal needs of low-income communities go substantially unmet. Many blame overregulation and seek a "free" market to solve the problem, but this has already been tested. Seizing on a deregulatory policy shift at the American Bar Association, private equity financiers established the first for-profit law schools in the early 2000s with the stated mission to increase access to justice by "serving the underserved". Pursuing this mission at a feverish rate of growth, they offered the promise of professional upward mobility through high-tech, simplified teaching and learning.

In Law Mart, a vivid ethnography of one such environment, Riaz Tejani argues that the rise of for-profit law schools shows the limits of a market-based solution to American access to justice. Building on theories in law, political economy, and moral anthropology, Tejani reveals how for-profit law schools marketed themselves directly to ethnoracial and socioeconomic "minority" communities, relaxed admission standards, increased diversity, shook up established curricula, and saw student success rates plummet. They contributed to a dramatic rise in U.S. law student debt burdens while charging premium tuition financed up-front through federal loans over time. If economic theories have so influenced legal scholarship, what happens when they come to shape law school transactions, governance, and oversight? For students promised professional citizenship by these institutions, is there a need for protections that better uphold institutional quality and sustainability? Offering an unprecedented glimpse of this landscape, Law Mart is a colorful foray into these essential questions.

"Law Mart is a compulsively readable and dark tale of a for-profit law school. The school's stated mission is to provide 'access' and 'innovation' to underserved populations, admitting students with low scores and limited options. Out of sight of students and accreditors is a corporate operation that uses emotional intelligence testing for employees, implements curricular reforms to satisfy nervous investors, and fires and intimidates professors who object to changes they perceive as detrimental to the students. This compelling book raises serious concerns about the permeation of economic imperatives in academia."
—Brian Z. Tamanaha, Washington University School of Law