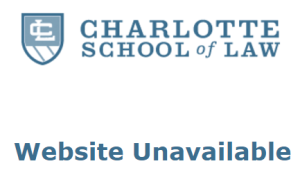 The Charlotte School of Law is closing effective immediately, according to an email the alumni association sent out to former students.

An email obtained by Channel 9 from Lee Robertson, the president of the Charlotte School of Law Alumni Association, said he received a call Monday from Interim Dean Meggett about the school’s future.

During the call, Meggett said that the American Bar Association denied the law school’s Teach-Out Plan and that the North Carolina Board of Governors declined to grant an extension of the law school’s license to operate, according to Robertson.

Robertson said the students would be informed Tuesday of the development.

I'm not sure that accreditation was designed to serve the purpose that you seem to think it's supposed to serve.

It is most telling of all that, to the very moment of its collapse, and despite the many abuses heaped upon its students, this abomination remained "fully accredited" by the ABA. That is how ABA looks after law students and educational standards.