Caron: From Moses To Hamilton: A Dean’s Journey 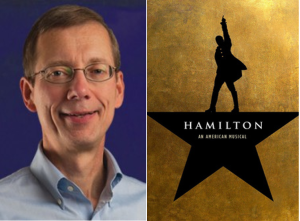 For my Southern California friends: I have the great honor of speaking this Sunday (Sept. 3) at Pepperdine University's campus church service held in Elkins Auditorium starting at 10:15 am. The title of my talk is From Moses to Hamilton: A Dean’s Journey. For a teaser, see C.S. Lewis & Lin-Manuel Miranda: How I Found My Faith In Mere Christianity And Deepened It In Hamilton:

I repeatedly (perhaps excessively) extol the genius of Hamilton (see links below). I often tell people that the play changed my life and led me to seek the deanship of Pepperdine law school.

Part of the explanation, of course, is the artistic majesty of the play. Like Michelle Obama, I think it is the best piece of art in any form that I have ever seen in my life. Like Oskar Eustis, I believe that Lin-Manuel Miranda is the William Shakespeare of our time. But Hamilton also transformed my life like nothing else has since I read C.S. Lewis's Mere Christianity twenty-one years ago.

Although I was born and raised a Catholic and attended Georgetown University, in my 20s I drifted away from what little faith I had. Faith was totally absent in the early years of my marriage. When our children were 3 and 5, my wife decided that we needed to start going to church for the sake of our kids. After checking out several churches in Cincinnati, we attended the first service of a tiny start-up church (now one of the largest churches in America). We began regularly attending the church, and I devoured several books to learn more about the Christian faith. Reading Mere Christianity convinced me of the truth of the Bible and the Gospel message.

Seeing Hamilton was the second epochal event in my faith journey, on a par with reading Mere Christianity.

Thank you for this post and reference to your 7/24/17 teaser. If the service is recorded, I would appreciate video link. Blessings.

Refuse to see it after actors "addressed" Pence at conclusion of the play.

Democrats are obsessed with that play.