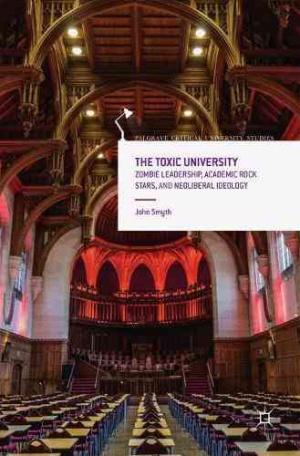 This book considers the detrimental changes that have occurred to the institution of the university, as a result of the withdrawal of state funding and the imposition of neoliberal market reforms on higher education. It argues that universities have lost their way, and are currently drowning in an impenetrable mush of economic babble, spurious spin-offs of zombie economics, management-speak and militaristic-corporate jargon. John Smyth provides a trenchant and excoriating analysis of how universities have enveloped themselves in synthetic and meaningless marketing hype, and explains what this has done to academic work and the culture of universities — specifically, how it has degraded higher education and exacerbated social inequalities among both staff and students. Finally, the book explores how we might commence a reclamation. It should be essential reading for students and researchers in the fields of education and sociology, and anyone interested in the current state of university management.

Inside Higher Education, ‘The Toxic University’:

Q: Would you define “zombie leadership”?

[W]hat we have occurring in universities is a complete detachment of what passes as academic leadership from an understanding of the essence of the work of academics and students. There is simply no evidence that commodifying higher education in some kind of mythical race to the top has any effect whatsoever in improving what goes on inside universities — indeed, the reverse is the case. Even the IMF as the major celebrant of neoliberal economics has recently recanted. The whole panoply of league tables, performance indicators, impact factors, measurement, image and impression management, and the like, as it exists in higher education, is fake.

University administrators and policy makers who purport to believe in it and promulgate it are in effect caught up in a form of witchcraft they do not understand — and I say this as someone who was trained an economist, but now works as a sociologist! What is expunged, of course, as a result of this zombie leadership, is any understanding that universities are supposed to be places of courageous social critique, not places manacled by and subservient to market forces.

Q: You note that while the condition of many academics has worsened, “stars” are doing well. Why is this?

A: The answer is pretty simple. Academic superstars are seen as important emblems with which universities can sustain the myth that the competitive way is working, that some institutions and departments are top dogs, and that hierarchies are the evidence that the market does indeed sort things out. Recruiting and constructing superstars is also a backdoor way of blaming those deemed not to have made it, and to make it look as if success has to do with personal attributes and the application of effort, while conveniently ignoring the structural conditions necessary for success as an academic. As U.S. sociologist C. W. Mills put it so neatly in his Sociological Imagination, "public issues" (such as adequately supporting the work of university academics) are recast as "personal trouble" (lack of individual effort). In other words, constructing superstars, who are given privileges unimagined by rank-and-file academics, shifts the blame onto individuals while allowing austerity measures to be implemented with little room for opposition.