With the looming deadline on both the debt ceiling and the tax reconciliation bill (not to be confused with the ACHA reconciliation instructions), taxes and, hopefully, tax reform are moving to the top of the legislative agenda.   The rhetoric of tax reform is heating up.  Yesterday Paul Ryan tweeted: 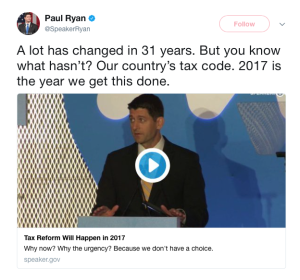 Speaker Ryan is not the only member of GOP leadership discussing tax reform.  News last week broke that Steve Bannon wants to raise the top bracket rate to a number that has ”a 4 in front of it”. So, the GOP continues to a least float the idea of substantive tax reform measures. 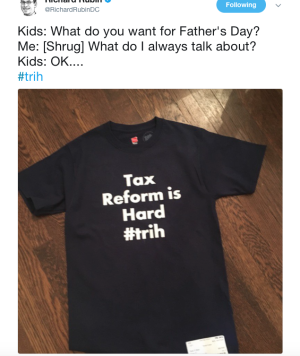 Reactions to both Speaker Ryan’s and Mr. Bannon’s statements have been, um, interesting. Cutting through the “noise” a “signal” has emerged - tax reform is hard (#trih hashtag care of Richard Rubin).

In this post, I want to use Mr. Bannon's statement to highlight why tax reform is hard. First, his statement generated a debate about the baseline, e.g., what are the tax rates that need reforming. Second, the statement lacked any language of the proposed reform measure.

Initially Mr. Bannon’s (now purported) statement prompted an interesting Twitter discussion between Daniel Hemel (@danieljhemel) and David Gamage (@davidsgamage) about different ways to think about the top tax rates.  (Some unsolicited advice: follow both of them on twitter). [Disclaimer: I am reproducing the discussion it appeared. Please forgive any grammatical/other errors as twitter is limited to 140 characters it is not intended to be “English”, “substantive,” or “perfect”.]

I agree that some taxpayers face EMRs above 39.6%. But I still think it is misleading to say that 39.6% is not “the top marginal rate”.

It is the top statutory PIT rate. I agree with pay too much attention to statutory rates. But EMRs are all just diff ways of slicing data.

Plus, many think that this is an aspirational distributional idea embedded in statutory rates, to some extent –and I agree with qualifications.

When two top law professors cannot even agree on the top marginal rate politicians have a long way to go. In my opinion, this is the greatest barrier to tax reform. Having a basic agreement of the actual definitions and baselines we are going to use is critical.  For example, what is the end game, i.e. distributional goals.  The lack of consensus on both dimensions might be both impossible and the reason tax reform lately has gone nowhere.

Following up on a different tract of Mr. Bannon’s statement, is Joe Thorndike's Taxanalysts article. In this article, Mr. Thorndike points out that Mr. Bannon might have it right and raising taxes on the wealthy is a rather popular idea.  So, Mr. Thorndike is optimistic that there might be some there-there in Mr. Bannon's statement. But, like all tax plans so far issued by the administration and the GOP led House and Senate, there is absolutely no substantive plan.  Mr. Thorndike, rightfully, critiques the administration for lack of a plan let alone a coherent plan.

My guess on why the GOP leadership is so hesitant to float actual ideas instead of concepts is that tax reform is hard! Once there are actual plans, interests groups coordinate and critics, well, critique.

For example, the one tax plan that actually had substance, the Destination Based Cash Flow Tax, ran into numerous dissenters. Unlike a mere statement, the plan was well thought out and articulated. The DBCFT could be attacked based on real facts. Because of the intellectually rigorous examination of the consequences of tax reform, actually putting forth a plan, getting it scored by CBO, OMB, and outside think tanks, it makes leadership hesitant.

When a solid idea is dragged through the proverbial mud what then of half-baked ideas? Oh, yeah, we did see a half-baked idea dragged through the mud.  Anyone remember the crazy LLC plan where the administration wanted to apply the 15% rate to LLCs.  Against this backdrop, does anyone (other than law professors who are used to their ideas being dumped on) want to participate?

My concern is that without plans being floated, tested, and contemplated, we will end up with tax reform that looks like, well, Trumpcare; a plan hatched in the dead of night voted on without a score or opportunity to debate. Importantly, unlike Trumpcare, the core GOP base will not balk.  Democrats and Republicans will not call into Congress because tax reform does not resonate like healthcare.  That alone should keep us up at night.

[If you think you are missing out on twitter, here is a list I put together of tax professors on the medium.  I'm there as @professortax.]

Tax reform is unstable, therefore nearly pointless. Any compromise made will be undone the next time political winds shift. We proved this in 1986-1993.