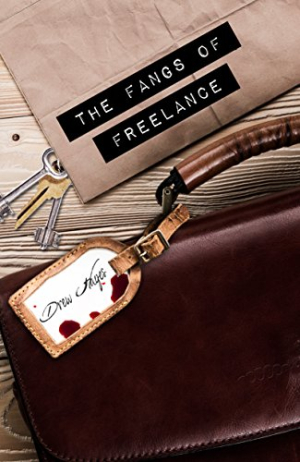 In this blog post, David Gamage (Indiana) interviews Drew Hayes about Fred’s tax accounting practice, and about why members of the tax law and policy community looking for a fun, guilty-pleasure read might want to check out the Fred series of books.

Q:  How did Fred end up as a vampire accountant?  Why do supernatural creatures need accounting services in your novels?

A:  Fred was always an accountant, but the vampire thing was an unexpected turn in the road. I won't go much into how that happened, since it's covered in the novels. Suffice it to say that upon discovering his new condition, Fred opted to adapt how he did business, rather than try and learn a whole new trade. As for what parahuman creatures need accounting for: pretty much the same as humans. Anyone running a small business, dealing with multiple revenues streams, or, of course, in need of a break on their taxes.

Q:  Reading your books, it seems that Fred primarily does tax accounting.  The discussions of Fred’s work seem to center around filing taxes rather than his keeping general business books.  Am I understanding this correctly?

A:  Tax accounting gets a lot of focus in some of the earlier books mainly because the parahuman tax system leaves a lot of room for Fred's kind of services, and because it's an easy way to ease folks into the idea of an accountant protagonist. In later books we see more of what Fred can do, however for the first few works taxes served as a general entry point. After all, not everyone has done cost projections for the next quarter, but we've all had to pony up in April.

Q:  Did you research tax accounting practices before writing these books?

A:  Some, although I've got a little finance background already. Much as I love Fred, I don't try to drill down too deep on the work he does in the books. While he is great at his job, much of the character comes through in the way he conducts business and treats others, so that's the area I try to give more time in the spotlight.

A:  There is indeed. In the books, it is established that parahumans in America are, in fact, all citizens. The government knows about them, which means they have certain rights and responsibilities associated with citizenship. However, since few parahumans tend to be the sort to keep up with or file paperwork, their version of a tax system is just getting handed a bill every year. They can use the normal tax process if they so choose, paying the bill flat-out is just an option to accommodate those who don't want to deal with the hassle. Fred can offer such value because he's bringing them into the modern age, getting them to go through the proper system with all the perks like deductions that come along with it. And, of course, as the books go on and we see more of his work, Fred has clients he helps with more common business and finance tasks.

Q:  The tax system you just described for “parahumans” potentially has a lot to be said for it on tax policy grounds.  A number of tax academics have suggested similar proposals in a variety of contexts, whereby taxpayers could choose between either paying a (presumably higher) amount calculated through a simpler system or else paying an amount calculated through a more complicated and involved system.  But how does this system of parahuman taxation work for those with little income or other resources to pay tax?  Are these parahumans forced to use the traditional income tax system?

A:  The parahuman tax system in its uncomplicated "just pay this bill" form works on a flat tax of overall income. So those living in the wild would have no direct tax to pay, since they aren't generating any income. For those who do and fall short, there are other options depending on their individual treaties and agreements with the government. A dryad might be able to work off her debt by offering aid to a struggling farming community, for example. It would vary from parahuman to parahuman, because while they do all have citizenship, their individual needs led to independent negotiations.

Q:  I see.  I had misunderstood the “just pay this bill” presumptive tax system then.  It sounds like that system is effectively a gross receipts tax, with an option to negotiate to pay through in-kind services rather than with cash?

A:  I think that sums it up well. While the exact options will vary between respective parahumans, that captures the overall outline of the structure.

Q:  How do parahumans in your stories cope with international and multinational tax issues?  Do other countries tax parahumans, or is it just the U.S.?

A:  That's actually not an issue, since America is the only country to formally (if secretly) recognize parahumans as citizens. In the history of Fred's world, parahumans actually helped win the American Revolution. The price for their help was the aforementioned citizenship and negotiated treaties, giving them a land they could live in without fear of being driven out by scared humans. While parahumans do live all over the globe, only in America do they have the protections and obligations that come with being a recognized citizen, obligations such as taxes. Some get around this by hiding their natures to the world at large or partnering with humans, but they all have to play by standard international tax rules since they are, ostensibly, just like anyone else.

Q:  Is there anything else you’d like to tell us about your Fred books, that would be of particular interest to tax lawyers, tax academics, and the other sorts of tax policy wonks that are likely to read this blog?

A:  If you've ever wanted to see a protagonist who is bad at punching but exceptional at paperwork, then Fred might be the vampire accountant for you.

Are there tax advisers who aren't vampires?