My Advice to Bezos (And Gates, Buffett, Etc.): Pay Some Tax

Jeff Bezos, the billionaire founder of Amazon, has asked on Twitter for advice about the use of his fortune for philanthropy. 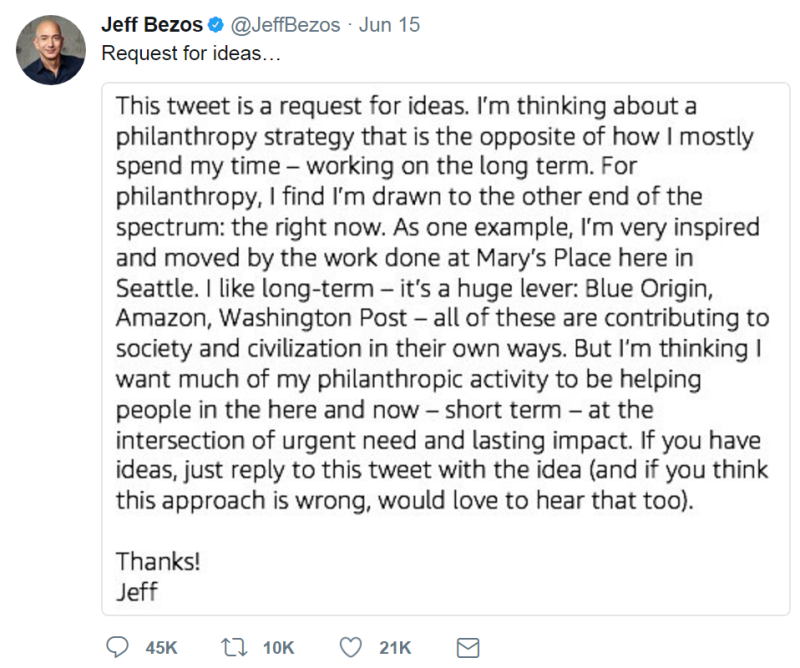 My advice is that Mr. Bezos should pay some tax.

Contemporary attention to philanthropy is largely attributable to the admirable work of Warren Buffett and Bill Gates, Jr. Through their efforts, The Giving Pledge, Buffett and Gates have commendably encouraged rich individuals in the US and abroad to devote much of their wealth to charity. Buffett and Gates themselves have been generous with their own personal fortunes.

But, as I have discussed in the Florida Tax Review [Why the Buffett-Gates Giving Pledge Requires Limitation of the Estate Tax Charitable Deduction, 16 Fla. Tax Rev. 393 (2014)], there is a downside to the Buffett-Gates Giving Pledge: Under current law, the federal Treasury loses substantial revenue when appreciated stock is donated by a US citizen to charity. When Buffett’s Berkshire shares, Gates’s Microsoft stock or Bezos’s Amazon shares are transferred to charity, and the federal Treasury loses the income tax on the capital gain which would have been realized had that stock been sold. Moreover, such gifts of appreciated stock to charity remove these assets from the coverage of the federal estate tax. The upshot is that the federal Treasury receives neither income tax nor transfer taxes when billionaires like Buffett, Gates, or Bezos contribute their appreciated stock to charity, stock on which these business founders have paid no federal income tax.

Besides their efforts for charity, Buffett and Gates have been outspoken in calling for higher income taxes on the rich (the so-called “Buffett Rule”) and for the preservation of the federal estate tax. Notwithstanding their advocacy of higher taxes for the rich, Buffett and Gates conduct their own affairs to avoid any federal taxation on their contributions of their appreciated shares to charity. This is perfectly legal but hard to square with the Buffett-Gates program of taxing the affluent.

Perhaps he could use the WP to start a serious discussion about how to avoid the situation where the ultra-wealthy avoid income and estate taxes. He could used himself, Gates, and Buffet as good examples. While their philanthropy is admirable, that does not pay the nation's bills.

I find fascinating these people who throw industries out of work, don't pay much tax, and then start telling us how to live our lives. Who cares what they think? At best they're like modern Rockefellers and Vanderbilts, and maybe not as good.

The U.S. Treasury does accept donations:

Based on the amounts received, methinks the left-of-center 1% probably aren't contributing much of anything.

I do recall when Mr. Buffett was challenged by members of Congress a couple of years ago to voluntarily pay more in taxes, after he complained he wasn't required to pay "enough", he responded with the Buffett Bluff: He'll pay $1 in extra taxes for every $1 members of Congress do.

Of course, he neglected to mention that with a net worth of $75 billion, he's far wealthier than all members of Congress put together, by a factor of 10-15 times.

Admittedly, an original attempt to avoid the charge of royal hypocrisy. Didn't work, though...

You could free up some cash for serious philanthropy by closing the Washington Post, Mr. Bezos. That would improve the quality of public discussion to boot.