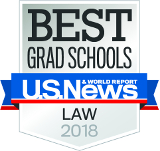 Law schools in our ranking were assigned a scaled desirability index score based on the “purchasing power” of their matriculating students. This index score was summed from six parts equal parts: a scaled 75th percentile GPA, a scaled median GPA, a scaled 25th percentile GPA, a scaled 75th percentile LSAT, a scaled median LSAT, and a scaled 25th percentile LSAT — each given one-sixth weight to construct the index. The consumer preference rankings we constructed from these index scores, proffered in the appendix below, surprised us, because there are consistencies between this ranking system and previous year’s peer review ratings, particularly among the top law schools. However, there are several notable exceptions, a few of which are detailed below, and the full rankings are published in the appendix at Table 1.

First, our rankings shake up the perennial contenders outside of the top-10. For example, the T- 14s are disrupted, with Texas falling on the outside of the coveted territory, while Georgetown narrowly scraped back into the top-14. Several public universities in the South tend to perform better in this ranking than their US News ranking, such as Alabama, William & Mary, and Georgia, all of which make our top-25. Midwestern bluebloods like Washington U. and Iowa, however, both slid outside the top-20, falling to 29 and 31, respectively, while Minnesota crept into the top-20. Boston College tumbled from 26 in the US News rankings to 42 in our rankings, and other traditionally top-30 schools, such as Arizona State, Ohio State, and Wisconsin, and newcomer UC-Irvine, were on the outside looking in.

There were some surprising additions to the top-25, such as BYU, and top-35, such as SMU and George Mason, all of which have often are usually rated in the middle of the Top-100 law schools by US News. Also, perennial top-40 schools were also impacted, like North Carolina, which fell to 45, and Washington & Lee fell precipitously to 65. Florida State, Utah, and Maryland were also ousted from the top-50. Notable newcomers to the top-50 include Nebraska, Northeastern, and Pepperdine.

This essentially rewards nonelite law schools who cut matriculating classes as opposed to gutting admissions standards to keep enrollment steady. For instance, Dear Northeastern, which in this list has a much better showing than in USNWR (or in its employment outcomes) has kept its LSATs and uGPAs steady over the last several years. But at what cost? In 2010, they had 220 1Ls. By 2014, that had dropped to 126. And the median tuition discount exploded from the $8k/year it was before, during, and well after I was a student way up to $27k/year. In other words, they are almost certainly losing sheds of money to keep appearances. *Shockingly,* they aren't very forthcoming about such things with their alumni. And even with that massive $27k discount, it is still cheaper for the public-interest oriented students to attend UMASS Law down New Bedford, where tuition is $20k/year less and the cost of living is honestly about a third of Boston's.