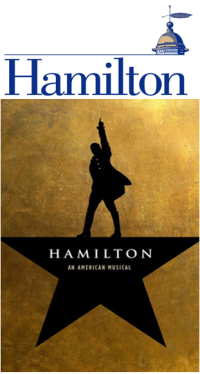 Chronicle of Higher Education, Before the Musical, There Was the College:

Hamilton, that is. The popularity of the musical about the life of Alexander Hamilton has apparently rubbed off on the liberal-arts college in upstate New York, which has seen applications rise in the past year, says David Wippman, Hamilton’s president. The college was named for the once-forgotten founding father, who was a trustee of the Hamilton-Oneida Academy (renamed Hamilton College in 1812), and the college's mascot, “Alex,” is a representation of Hamilton in his Continental Army uniform. Although it’s not something he can quantify, Mr. Wippman says the hit musical “certainly hasn’t hurt,” and it’s been a boon for alumni: As the show tours the country, the college buys blocks of tickets so Hamilton alums can attend.

Pity. That college is a scandal. Clinton, NY is a nice town, though.