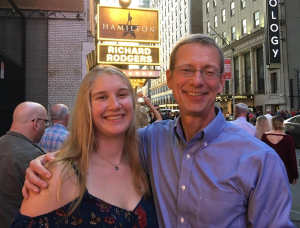 Hamilton changed my life. I am not exaggerating when I say Lin Manuel-Miranda will be remembered as the William Shakespeare of our time.

Dean Caron first saw Hamilton last August. His daughter was beginning medical school, so he wanted to mark the moment by doing something special. Before seeing the play, his daughter had the soundtrack on repeat at home and in the car, so Caron was familiar with the lyrics. Not only does Caron believe that the play is “genius,” but he feels it’s a compelling musical metaphor for his tenure as dean. ...

The faith aspect of the play, which Caron believes is largely overlooked, is the theme that most affected him. “The first seventy-five percent of the play is about how Hamilton, through perseverance, hard work, and study, used the power of his words to rise up from being a poor orphan in the Caribbean.” The remainder of the play demonstrates the redemptive power of forgiveness and reconciliation in the face of unimaginable tragedy and loss. Caron adapts many of Manuel-Miranda’s lyrics to the legal education experience: “We are called to exude a spirit of forgiveness in our lives together.”

"Was Alexander Hamilton a Christian Statesman?", a magnificent essay on Hamilton's faith by Douglass Adair and Marvin Harvey, was published in 1955 in
The William and Mary Quarterly, Volume 12, Number 2

It is available at this link: