Florida Coastal School of Law plans to cut enrollment and reduce course offerings as its leadership looks to avoid a fate similar to its sister schools in North Carolina and Arizona.

Within the past year, the American Bar Association placed both Charlotte Law School and Arizona Summit Law School on probation for admission policies and academic standards.

Jacksonville’s Florida Coastal expects to see an enrollment decline for the fall semester as it rolls out stricter admission requirements for incoming first-year students. The tougher criteria is just one piece of the for-profit school’s plan to bolster its own bar passage and employment rates — both issues the school has been criticized for in the past.

“In order to raise standards, we have to shrink the size of our classes,” Florida Coastal Dean Scott DeVito said.

Research indicates doing well on the Law School Admission Test can result in a better chance of passing the bar on the first try, but that’s not always the case. Schools continue, however, to place heavy weight on the standardized test.

“That is the type of lever you can pull on to predict bar passage rates,” DeVito said. “It is hard to tell based on GPA and school choice.” ...

There is no indication by the American Bar Association that Florida Coastal is in jeopardy of sanctions similar to Charlotte and Arizona Summit. The ABA determined both schools: failed to maintain a rigorous program of legal education that prepares students for admission to the bar, as well as admitted applicants who did not appear capable of completing a legal education.

At the beginning of the year, Florida Coastal failed to meet U.S. Department of Education standards measuring its graduates’ debt-to-income ratios — an outcome that means the school, if it fails again next year, could lose access to the federal student loan program. ... According to DeVito, the school just appealed the department’s decision. ...

As the changes are made, school leadership hopes to move downtown to a smaller facility and ultimately become a not-for-profit institution. 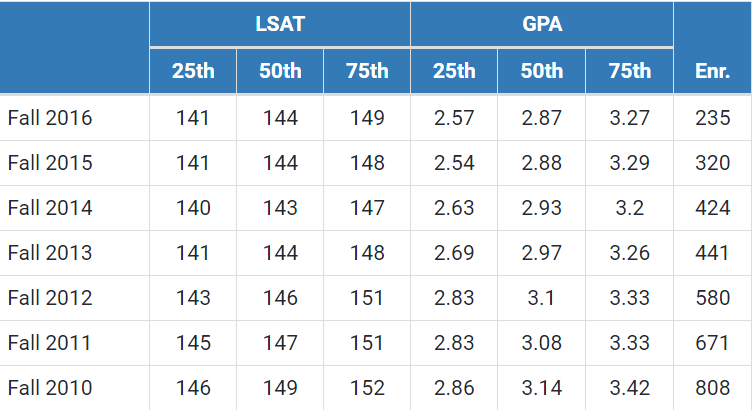 “That is the type of lever you can pull on to predict bar passage rates,” DeVito said. “It is hard to tell based on GPA and school choice.”

How nice to have in such a clear public statement, a fact that lots of deans of schools with recently-lowered admissions criteria still don't want to admit!!