As More States Kill Their Estate Taxes, Will The Push To Repeal The Federal Estate Tax Become Irresistible? 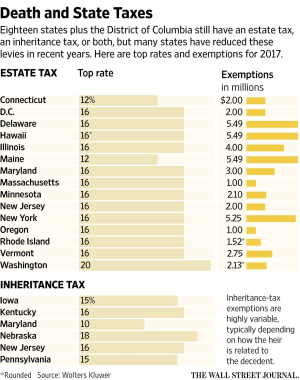 Want proof taxes can actually go down? In the past three years, nine states have eliminated or lowered their estate taxes, mostly by raising exemptions.

And more reductions are coming. Minnesota lawmakers recently raised the state’s estate-tax exemption to $2.1 million retroactive to January, and the exemption will rise to $2.4 million next year. Maryland will raise its $3 million exemption to $4 million next year. New Jersey’s exemption, which used to rank last at $675,000 a person, rose to $2 million a person this year. Next year, New Jersey is scheduled to eliminate its estate tax altogether, joining about a half-dozen others that have ended their estate taxes over the past decade.

This tax-cutting trend has been fueled by competition between the states for affluent and wealthy taxpayers. Such residents owe income taxes every year, but some are willing to move out of state to avoid death duties that come only once. Since the federal estate-and-gift tax exemption jumped to $5 million in 2011, adjusted for inflation, state death duties have stood out. ...

Two holdouts remain: Massachusetts and Oregon. These two have estate-tax exemptions of $1 million or below, compared with nine that did in 2009.

Last week Tax Foundation tweeted about the states that have either a state level estate or inheritance tax. 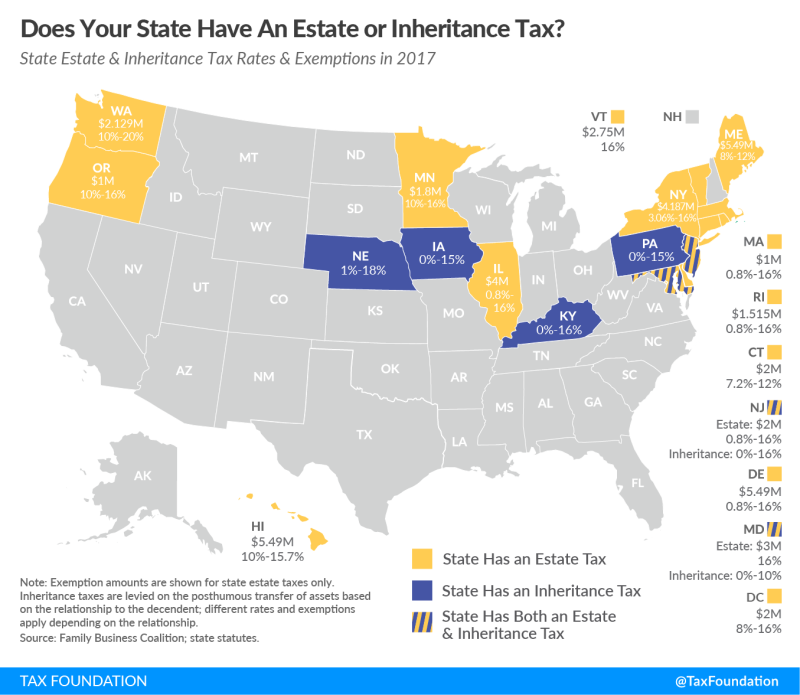 The map and subsequent conversations I have had reinvigorated my interest in the prospect of an estate tax.  Briefly in this post, I wanted to say a couple things about the state level estate or inheritance tax, the map, and the effect of the Economic Growth and Tax Relief Reconciliation Act of 2001 (“EGTRAA“) on the prospects of the elimination of federal estate tax.

[I]t now dawns on me that the switch to the deduction from the credit may have been a design feature not a design bug. I think most pundits believed that the switch was more accidental (although somewhat necessary for CBO scoring] than purposeful. However, if the long term goal was repeal of the federal estate tax, then the switch was not accidental. Let me explain my thinking:

The switch caused a break from the “sponge” or “pickup” tax regime to a separate obligation.  This put pressure on states to either (i) have an existing estate or inheritance tax, (ii) enact an estate or inheritance tax regime or (iii) lose out on the revenue stream. But, the federal government knew that a handful of states could not enact a regime because of constitutional constraints, and others would have a hard time convincing their electorate to add a new tax.  The most likely outcome of decoupling the states from the the federal system would be a majority of the states could no longer rely on the federal tax.  The benefit to this strategy is removal of states as stakeholders in the debate for the federal estate tax elimination.

To say it another way, the main argument for eliminating the estate tax is that only about 0.1%, or 1 out of 700 estates, owed any estate tax and some 2,700 deaths raised about $14 billion in estate taxes. Since the tax was limited in scope and revenue, the popular narrative is to eliminate the tax.  Well, that argument will get push back when the states want $3 billion of taxes via the credit regime.  Now that the states are decoupled, they do not care about the federal estate tax elimination proposals.

If you are for the estate tax because of a concern that wealth continues to be concentrated at the top, this real development should give you pause. Further, if you want the estate tax to not only stick around but be more robust, you should think about structuring an estate tax that shares more revenues to the states; the more stakeholders the harder elimination becomes.

It's relevant to federal taxation insofar as an increasing number of wealth Americans are renouncing their citizenship and moving to Switzerland, etc. While they may pay an exit tax, that's probably less than the federal estate tax on sizable estates.

Why would this create pressure for repeal of federal estate taxes? The article talks about competition between states to retain extremely wealthy taxpayers. Not relevant to federal taxation.