WSJ:  Deans Push To Lower California Bar Pass Score, But Lawyers With Lower Scores Are More Likely To Be Disciplined Or Disbarred 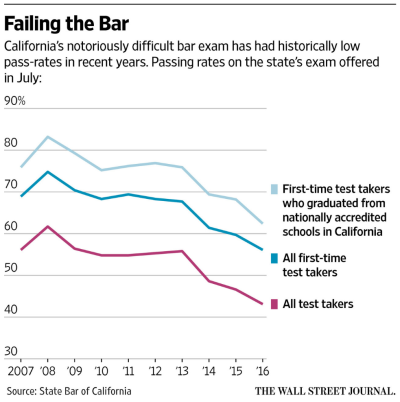 California’s notoriously difficult bar exam has long been a point of pride among the state’s lawyers. Now it is prompting blowback.

With passing rates hitting historic lows, the state’s law schools are pushing for a controversial change: lowering the score required to pass. The educators argue that California holds graduates to an unreasonably high standard that no longer can be justified, especially as the price of law school skyrockets.

Others say lowering the bar would pander to a recent cohort of law students with weak credentials, and that law schools should either raise their own standards or shut their doors. ...

[T]he State Bar of California is racing to answer a series of existential questions: Is the stringent test—with a passing standard higher than all states but one—serving the public interest? And does the exam even test what incoming lawyers need to know?

A study released this week by two Pepperdine University School of Law professors, Robert Anderson IV and Derek Muller, concluded that California lawyers with lower bar exam scores were more likely to be disciplined or disbarred during their careers, based on limited publicly available data:

The pass rate on the July 2016 California bar exam was the lowest since 1984. The resulting outcry from California law school deans has prompted the State Bar of California to reexamine the bar exam. The deans at schools accredited by the American Bar Association complain that the California bar exam’s passing score is too high and fails too many prospective attorneys.

But lowering the score may have significant costs. The bar exam is designed to be a test of minimum competence. Lowering the cut score means students who performed worse on the bar exam practice law. That may result in lower quality attorneys practicing in California. The California deans are skeptical that the higher cut score has a meaningful consumer protection role. The deans argue that the bar exam does not adequately measure professional competence and that the high California passing score is not necessary to ensure adequate professional responsibility and minimum competence in the practice of law.

In this Essay, we present data suggesting that lowering the bar examination passing score will likely increase the amount of malpractice, misconduct, and discipline among California lawyers. Our analysis shows that bar exam score is significantly related to likelihood of State Bar discipline throughout a lawyer’s career. We investigate these claims by collecting data on disciplinary actions and disbarments among California-licensed attorneys. We find support for the assertion that attorneys with lower bar examination performance are more likely to be disciplined and disbarred than those with higher performance. 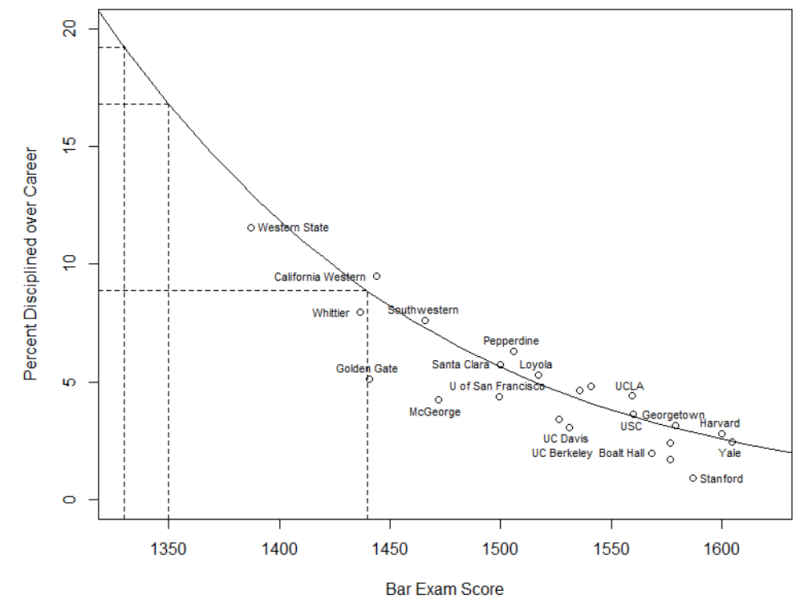 Although our measures of bar performance only have modest predictive power of subsequent discipline, we project that lowering the cut score would result in the admission of attorneys with a substantially higher probability of State Bar discipline over the course of their careers. But we admit that our analysis is limited due to the imperfect data available to the public. For a precise calculation, we call on the California State Bar to use its internal records on bar scores and discipline outcomes to determine the likely impact of changes to the passing score.

I found the Wall Street Journal very one sided in favor of lowering California's bar standards. I became acquainted with the California bar exam process years ago while working for a California law school. I discovered that California has a valid and reliable exam creation system, unlike most other state bars (I suppose the Uniform Bar exam will bring some scientific reliability and validity to other states as well). California has a system that ensures consistency in results from year to year, based on the cohort of students that California is using as the measurement year. Because they have went through the effort of creating this system, and then ensuring it is consistent each year, we know that the bar exam is not getting harder but rather, students are less prepared to take the exam.

A separate question worth asking is whether the bar exam ever had to be that hard to begin with.