I gathered data on the outcomes of every professional sports game over the past 40 years as well as data on state and local tax rates each team member faces. I then computed how much taxes predict winning for each league in every year while controlling for other factors such as population, income, franchise age and local amenities (i.e., weather).

Results of the analysis [Income Taxes and Team Performance: Do They Matter?] show that higher taxes consistently predict worse performance in every league — not just the N.B.A. but also Major League Baseball, the N.H.L., and the N.F.L. over the past 20 years. The findings do not change if I use championships or finals appearances instead of regular season wins, and no single city, team or year drives the results. 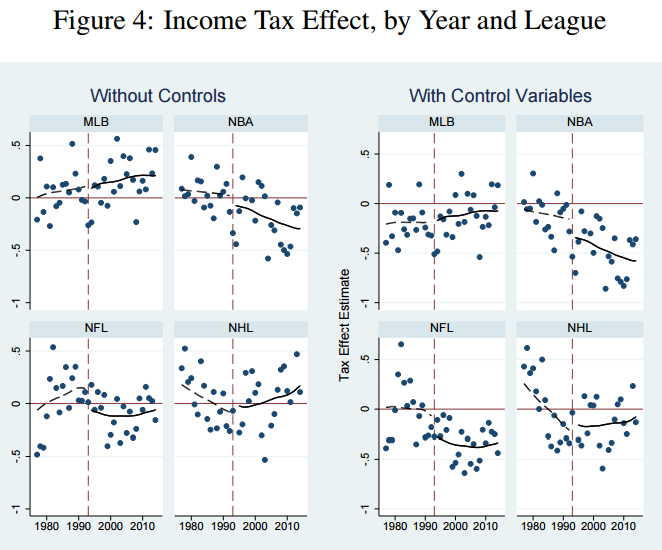 It’s in the N.B.A. that I find the largest effect. If Minnesota eliminated its income tax, the Timberwolves might win two to five more games each year. This may not sound like much, but the price for victories is quite high. Last summer the Washington Wizards signed Bradley Beal to a five-year, $128 million contract, and if things go well, they should expect him to contribute two to five wins per season. I find a much smaller effect in M.L.B., which has no salary cap, where a similar income tax change for the Twins would result in winning only about one more game each season.

These results should provide some good news for other long-suffering fans in Buffalo, Sacramento, Oakland, Washington, or all of Canada. It’s not your fault (entirely). Your teams have essentially been playing with ankle weights against teams from Florida, Texas, and Washington State. I am also sure that if you ask Jerry Jones and Mark Cuban under oath, they would admit some of the Cowboys’ and Mavericks’ continued success is because their players pay no state income taxes. ...

Wow! This guy's research definitely shows that people will waste their time and energy on just about anything!

I can see it now. Texas advertises: we don't care about paying for schools, roads, or health care. But if you want to see good sports, come on down. Florida, too. On the other hand, low tax states of Alaska and New Hampshire don't add much to the mix.

[thx for the tip, wyojd, on 'show me the money'. looks interesting.]

I presented a very similar theory with respect to the future of college athletics under the Pay-For-Play model in my article, "Show Me The Money! - Analyzing the Potential State Tax Implications of Paying Student-Athletes". See https://papers.ssrn.com/sol3/papers.cfm?abstract_id=2484597
Very interesting, indeed.

If anyone is seriously proposing that marginal tax rate policy is meaningfully informed by professional sports championships, the republic has jumped the shark. Bring back the vomitorium!

And on the other hand, the cities with the most sports championships are NYC with 55, Boston with 34, Chicago with 27, LA and Detroit are tied with 22, and then Philly with 17.

Or, to quote from a different NYT article, https://www.nytimes.com/2015/06/05/upshot/boston-and-pittsburgh-americas-most-successful-sports-cities.html?abt=0002&abg=0&_r=0, "Boston is America's most successful modern sports town," with its four teams winning championships in ten percent of seasons over the last 50 years. Oh, and none of our stadiums were built with even a penny of taxpayer monies.