Henderson:  The Number Of Law School Graduates Has Fallen 28% Amidst Declining Demand For Legal Services

Bill Henderson (Indiana), Supply of Law Graduates Is Shrinking, But So Is Demand: 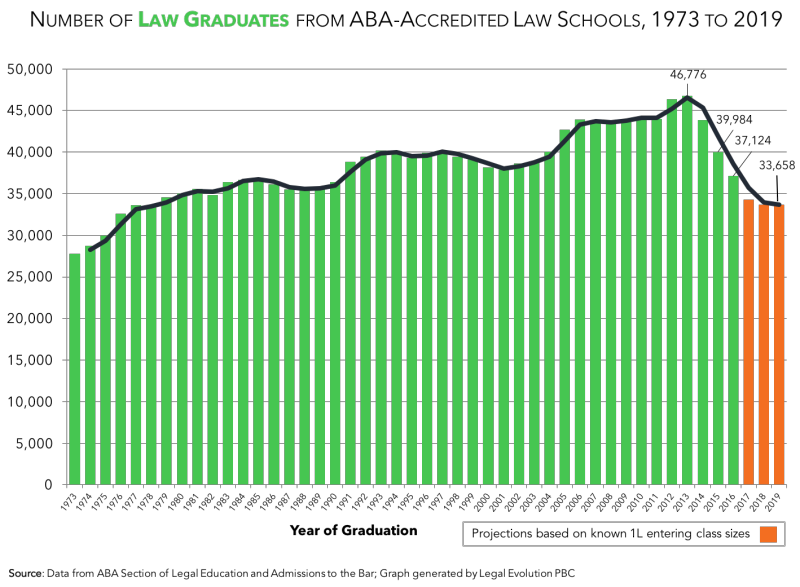 Is this good news for law schools? Not really.  The employment percentage is up only because the number of law grads is dropping faster than the number of jobs. But both numbers — grads (supply) and jobs (demand) — are declining. A true recovery would show the opposite.

The graph above reveals a dramatic drop in the number of law grads.  The green bars reflect historical data.   The orange bars are projections for the next three years based on incoming 1L classes that have already enrolled. (Based on a 10-year historical average, 90.1% of entering 1Ls receive a JD three years later.)  Between 2013 and 2019, the size of graduating classes will drop 28.0%.

This may be the bottom of the trough, as the number of projected graduates is essentially identical for ’18 and ’19 (33,667 versus 33,658).  Yet, it would be mistake to assume that things are headed back to normal.  We have to go back to 1978 to find graduating classes this small.  At that time, the US population totaled 223 million people.  Since then, we’ve added another 100 million people.

A population gain that large should translate into a lot more divorces, wills, contract disputes, DUIs, and personal injury claims, etc. And likely it has.  But it may be the case that a growing proportion of these legal problems cannot be cost-effectively solved by lawyers. ...

The chart below reflects employment outcomes (i.e., demand for new law graduates) since the ABA stepped into its new role as collector and disseminator of high-quality market information. 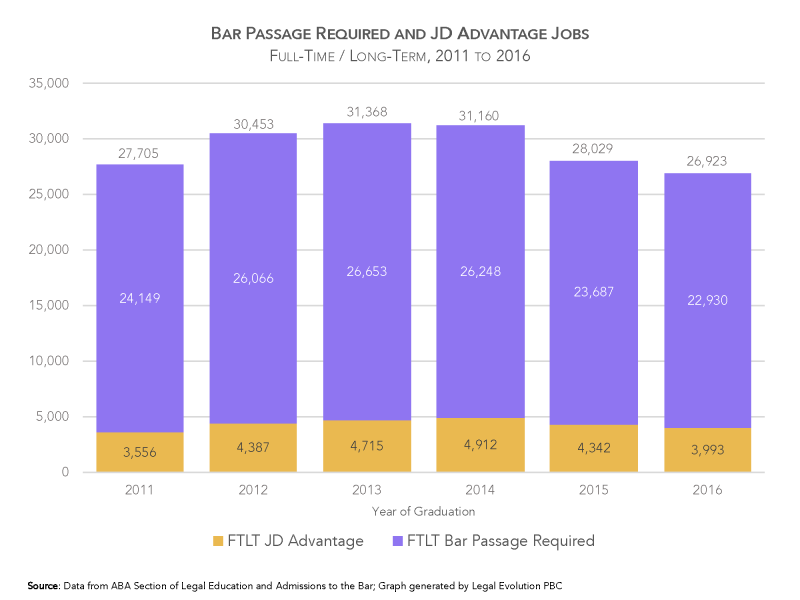 The key takeaway is that the entry-level market for law grads remains very soft. Of the six reporting years, 2016 had the fewest number of FTLT Bar Passage Required or JD Advantage jobs. ...

I created Legal Evolution because I became convinced that the biggest problem facing the legal profession and legal education was stagnant legal productivity.  Stagnant productivity is bad because it means that solving legal problems is becoming, in a relative sense, more expensive over time.  Thus, as practical matter, fewer people and businesses can afford to hire a lawyer to solve a legal problem.  Those are the economic forces driving the green/orange chart above.

The problem of legal productivity will be recurring theme here.  But a brief, concrete illustration is especially helpful for this post, as there is a systemic breakdown occurring in the practice of law.  This is a substantial root cause of underemployed law grads, flagging starting salaries, and lower law school enrollments.

Altman Weil's latest survey, in addition to the stats mentioned above, noted that demand has failed to return to pre-recession levels in 65% of US law firms. Legal work got too expensive and clients have taken work in-house or are finding alternatives to high-dollar lawyers in big law firms. http://www.altmanweil.com/LFiT2017

A lot of legal work can and is being done by unlicensed specialists. As a retired lawyer, maybe I am insulated from the results, but I feel that this is a good trend. More lawyers have been burned out from the dog work that lawyering entails at the lower level than are replaced by specialists, maybe.
JimB, JD

News from earlier this week:

"More than half of equity partners aren’t sufficiently busy at work, a greater number of non-equity partners don’t have enough to occupy their time, and close to nine in 10 law firms have chronically underperforming lawyers, an industry survey reports.

Those are among the findings of legal consulting company Altman Weil’s 2017 Law Firms in Transition Survey released Tuesday. More than 386 law firms of 50 or more attorneys responded for the ninth survey, painting a picture of a legal market characterized by an endemic erosion of demand for law firm services, increasing price competition, a need for greater efficiency in service delivery, an influx of new kinds of competitors and the inexorable force of technology innovation, Altman Weil said in announcing the survey results."

The trend here that I find most troubling is the leveling-off projection in the orange area. The reason I find it troubling is that it represents the best efforts of law schools throughout the country to keep their enrollments up, despite clear indications that the legal industry is shrinking (rapidly), despite the severe drop in highly-credentialed applicants (who understand this shrinkage is structural), and despite the legions of unemployed law graduates already out there, many of whom will never work as lawyers and most of whom are deeply in debt.

It's only getting worse: http://abovethelaw.com/2017/05/dechert-layoffs-they-laid-off-first-years-and-this-may-be-the-wave-of-the-future/

Law schools should take the lead and rethink what they do and how they do it. Graduates need a skill set on day one that is marketable and that justifies the expense of law school. Until that happens, shrinkage will continue.

If you're a lawyer in the legal academy, then times really are good.

In my recollection, law professors are quite adept at not being able to perceive evidence that many of their students don't become successful attorneys. For the most part they have no interest in actual practice of law and have done very little of it. Once they get tenure, they essentially check out of the job market for the rest of their professional lives.

Also, remember that many professors are quite old . A professor who graduated in the 70s or 80s from harvard law has no conception of what a modern law student goes through. He didn't have any student loan debts and probably paid for his schooling with a summer job flipping burgers. He also has no idea that the legal job market has gone to shit. All of the people he went to school with became either prestigious federal judges or biglaw partners. To him, the biggest crisis is whether you chase enormous piles of money doing boring corporate work or slightly smaller piles of money doing more prestigious and interesting work.

"How does one reconcile this actual data with those in the legal academy who continue to. . . "

They are liars, fools, or both.

How does one reconcile this actual data with those in the legal academy who continue to proclaim that times are great for lawyers; there is a shortage of lawyers; a J.D. is a ticket to a million dollar premium no matter what school you attend; there's been no structural shift in the legal profession; 4th tier schools whose students don't get jobs or pass the bar somehow serve the undeserved (hi La Verne); since there are so many people in this country, there is a justice gap requiring the existence of an unlimited amount of failing law schools; etc.? Someone's being disingenuous. Who is it?

Here is another disturbing trend. According to the BEA, the real value added (real GDP) of the legal industry is down 1.15% since 1998. However, according to the ABA, between 1998 and 2016 the number of active attorneys has grown 33%! So we have a lot more attorneys, but output is flat.

We have a growing economy that is employing a lot of people. Unfortunately, the growth of other industries has not translated into increased demand for legal services. Instead of publishing bogus studies on the supposed value of a JD or LLM, misreporting the BLS stats, and claiming that the problems in the legal profession are problems all industries face due to globalization, it’s time to acknowledge these troubling trends for the legal profession. It’s time to ask, how can lawyers meet the needs of this growing economy?