George Fletcher Sues Columbia Law School For Age Discrimination, Says His Course Assignments May No Longer Allow Him To Teach One Semester Per Year For Full Pay 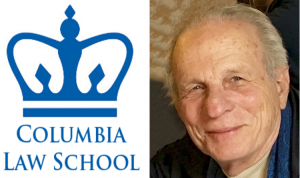 Columbia University is battling allegations of age discrimination leveled by one of the elite school’s most prominent law professors.

Lawyers for the New York City-based university have asked a judge in Manhattan to dismiss a complaint brought by 78-year-old law professor George P. Fletcher, an influential scholar of criminal law.

Prof. Fletcher sued Columbia University and the dean of its law school in March, alleging that the administration was pressuring him to retire and giving favorable treatment to younger faculty members.

Lawyers retained by Columbia University filed a motion this week seeking to dismiss the suit. “There is simply no basis for that allegation, and none appears in the complaint,” their motion stated. ...

Prof. Fletcher has accused the Ivy League university and Columbia Law School Dean Gillian Lester of essentially plotting against him by making it harder for him to meet a teaching quota [of 10 credits]. For more than a decade, he says, he was able to accumulate enough teaching hours, while spending spring semesters abroad as a visiting scholar in Israel.

That arrangement, he contends, unraveled in January under the leadership of Prof. Lester, a former University of California, Berkeley, law professor who joined Columbia as dean in 2015. She told him he could no longer teach “Introduction to American Law,” citing weak student evaluations, among other performance concerns, according to his suit.

Prof. Fletcher says students overwhelmingly gave him positive reviews, but says the dean’s concerns were merely a pretext for putting his tenured status in jeopardy. He says he was assigned to teach an elective course that risked being canceled owing to low enrollment. ...

Lawyers for Columbia argued that the discrimination claim is too unsubstantiated to hold up in court. “[I]t is well settled (and common sense) that a university’s mere failure to accommodate a professor’s preferred course schedule does not give rise to a discrimination claim,” their motion stated.

Prof. Fletcher has been a tenured professor for more than 30 years and is the author or co-author of more than a dozen books, including Rethinking Criminal Law [(1976)] and recently Law and The Bible [(2013) (with Robert Cochran (Pepperdine), David VanDrunen (Westminster Seminary) & John Witte (Emory)] His work exploring principles and theories behind criminal law and tort liability is widely cited and taught.

He also has a history of waging academic battles. In 1999, he feuded with the school’s dean who faulted him for assigning an exam that posed a graphically worded question about a man who murders a woman’s fetus.

31.  In response, Fletcher stated that he was willing to teach the proposed elective course, but noted that Columbia should assume responsibility in the event of low enrollment, as it had in the past. In other words, since Fletcher was fully willing and prepared to teach ten credit points’ worth of courses, it would not be fair for the Law School to reassign him to a class with a risk of cancellation, which would place Fletcher’s credit total and status with the Law School at risk.

32.  Lester would not provide Fletcher with any assurance in this regard. To the contrary, she told him that “we will treat this course in a manner consistent with our usual policy, which is that we reserve discretion to cancel classes that draw very low enrollments. I am hopeful that all of your offerings will generate sufficient enrollment to go ahead, but if they do not I cannot guarantee that they will not be cancelled.”

33.  Thus, it was made clear to Fletcher that, despite his willingness to teach ten (10) credits worth of courses, he might nevertheless come up short due to the Law School’s unilateral elimination of those credits. In an effort to prevent that outcome, he proposed that he be assigned to teach a different mandatory course, such as Torts — a subject matter in which his well-earned and well-known expertise is publicized by Columbia on its website.

34.  Columbia declined that proposal, stating that Fletcher would have to substitute IAL with an upper-year elective — which, again, would place him at risk of having his course under-enrolled and ultimately cancelled. Lester also wrote to Fletcher that if that “option is not acceptable to you, we will have to revisit the arrangement whereby you load all of your teaching into one semester, or we will need to discuss moving to a fractional appointment.”

35.  Taken together, this series of communications from Defendants over the past several months have placed new terms and conditions upon Fletcher’s continued tenure as a Professor at the Law School. Rather than allowing Fletcher to teach a mandatory course to ensure that he earns the full ten (10) credit points that he is willing and able to earn, the Law School has placed his credit total, and therefore his tenure, directly at risk and subject to Defendants’ unilateral discretion.

36.  Moreover, the threat of moving Fletcher to a “fractional appointment” confirms what was already apparent: that Defendants improperly are attempting to force Fletcher to retire. Defendants have been harassing Fletcher with false and unsupported complaints about his teaching procedures, in the first instance — and worse, actually have removed him from a course and have threatened his tenure based on those fabrications.

37.  Meanwhile, upon information and belief, faculty members who are much younger than Fletcher have had real, and more egregious, administrative shortcomings in their performance. Those younger faculty members nevertheless have been allowed to keep teaching mandatory classes, with virtually guaranteed enrollment and annual teaching credits.

Fetch me the world's smallest violin.

I don't see anything ridiculous about this

The has enjoyed the ivory tower long enough. Let someone else have a chance.

The memorandum in support of Columbia's motion to dismiss is here: http://leiterlawschool.typepad.com/files/2017.05.23-fletcher-v.-columbia-motion-to-dismiss.pdf

The complaint is strange. It boils down to the Dean assigning the professor to a course that might get cancelled because of low enrollment. If that happens, though, he just has less work to do. To be sure, he must make it up in some succeeding year, but it still isn't clear that delaying work is cause for a lawsuit. He says his tenure is at risk, but I don't see why that would be true. A Dean can't fire a tenured professor just because the Dean assigns him courses students won't take. If the Dean does do that, that's the time to sue. Meanwhile, Professor Fletcher is making a fool of himself by complaining about being underworked.

Lack of mandatory retirement is going to be a huge drag on schools. I think we are just at the tip of the iceberg. The Baby Boomer generation basically never plans to retire voluntarily. There will be dozens of faculty members at each school hanging on well past 70 or even 75, all ready to file lawsuits at the drop of a hat if any job perks are taken away. It is going to be a disaster for schools, just as it would be for industry if they ever allowed something so absurd to happen. Meanwhile, there are what, 50 new TT hires at American law schools this year?

It might be ridiculous. It might not. The dean's office isn't always above using its scheduling power to deliberately punish a professor. If they put your class at the same time as core courses that have to be taken, or on Friday afternoons, or in the same semester as the course it has as a prerequisite.... well, they can do a great deal to get it cancelled without looking like they are actually pulling the trigger themselves. And then they demand you work for free in the summer, so they can offer a robust summer curriculum. Pffft. I wouldn't discount that there is something going on...

Would it be so terrible to teach for two semesters and spend the summer wherever you want?

I'm glad to hear that they're fighting this ridiculous lawsuit.