Alum Donates $1.5m To University Of Florida To Fuel Law School's Rise In U.S. News Rankings From 48 To 35 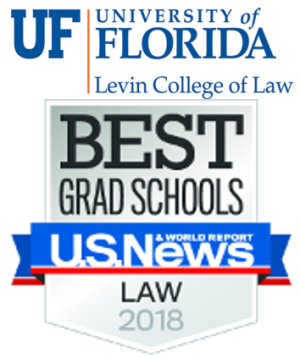 University of Florida Levin College of Law alumnus Hugh Culverhouse Jr. has pledged $1.5 million to be used by the school for incoming student scholarships if the law school's community raises an additional $1.5 million by Aug. 14, the first day of classes.

Culverhouse, a Coral Gables-based lawyer who graduated from the law school in 1974, said he was inspired to create the Culverhouse Challenge by the school's leap from 48 to 41 in the most recent U.S. News national rankings of law schools. It was the highest ranked law school in Florida, followed by the law schools at Florida State University (48), University of Miami (77), Stetson (96) and Florida International University (100). Six more Florida law schools were not ranked.

Culverhouse, son of former Tampa Bay Buccaneers owner Hugh Culverhouse, had initiated a similar challenge in honor of the new ranking, pledging $41,000 for student scholarships if other donors matched his gift. Alumni exceeded the $82,000 goal, raising over $200,000 in 48 hours, according to a school statement. So Culverhouse took the challenge up a notch.

The scholarship drive is intended to increase the law school's scholarship pool in order to attract the nation's most talented students. The larger applicant pool allows the school to be more selective, thereby further fueling its rise on the U.S. News & World Report ranking of law schools.

"By offering more scholarship money last year, we were able to recruit a highly credentialed and diverse class starting in August, 2016," UF Law Dean Laura Ann Rosenbury said. "We recorded the largest increase in both median GPA and median LSAT of any top 50 law school, which played a big role in our jump in the rankings."

Rosenbury, who took her post in July 2015, had publicly vowed last year to raise the school's ranking, then 48th, to the mid-30s within three to five years. In March, Rosenbury said she was "very optimistic that next year we will break into the 30s."

The rise in the rankings, in turn, inspired the donation challenge for a scholarship fund. The school hopes the scholarship money will help UF Law recruit more top students. It cites the example of third-year student Rachel DeLoach, who said she chose UF Law over Columbia, New York University and Georgetown in large part because the school gave her a significant scholarship.