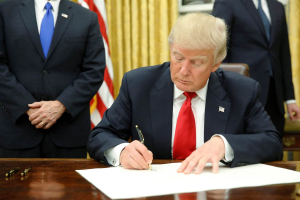 By the authority vested in me as President by the Constitution and the laws of the United States of America, it is hereby ordered as follows:

Sec. 2.  Addressing Tax Regulatory Burdens.  (a)  In furtherance of the policy described in section 1 of this order, the Secretary of the Treasury (Secretary) shall immediately review all significant tax regulations issued by the Department of the Treasury on or after January 1, 2016, and, in consultation with the Administrator of the Office of Information and Regulatory Affairs, Office of Management and Budget, identify in an interim report to the President all such regulations that:

(i)    impose an undue financial burden on United States taxpayers;

(ii)   add undue complexity to the Federal tax laws; or

(iii)  exceed the statutory authority of the Internal Revenue Service.

This interim report shall be completed no later than 60 days from the date of this order.  In conducting the review required by this subsection, earlier determinations of whether a regulation is significant pursuant to Executive Order 12866 of September 30, 1993, as amended (Regulatory Planning and Review), shall not be controlling.

(b)  No later than 150 days from the date of this order, the Secretary shall prepare and submit a report to the President that recommends specific actions to mitigate the burden imposed by regulations identified in the interim report required under subsection (a) of this section.  The Secretary shall also publish this report in the Federal Register upon submitting it to the President.  The Secretary shall take appropriate steps to cause the effective date of such regulations to be delayed or suspended, to the extent permitted by law, and to modify or rescind such regulations as appropriate and consistent with law, including, if necessary, through notice and comment rulemaking.  The Secretary shall submit for publication in the Federal Register a summary of the actions taken in response to the report no later than 10 days following the finalization of such actions.  Should all such actions not be finalized within 180 days following the submission of the report to the President, the Secretary shall submit for publication in the Federal Register an initial report summarizing the actions taken to that point.

(c)  To ensure that future tax regulations adhere to the policy described in section 1 of this order, the Secretary and the Director of the Office of Management and Budget shall review and, if appropriate, reconsider the scope and implementation of the existing exemption for certain tax regulations from the review process set forth in Executive Order 12866 and any successor order.

(d)  The Secretary shall cause section 32.1.5.4.7.5.3 of the Internal Revenue Manual to be revised, if necessary to fulfill the directives in subsection (c) of this section.

Sec. 3.  General Provisions.  (a)  Nothing in this order shall be construed to impair or otherwise affect:

(i)   the authority granted by law to an executive department or agency, or the head thereof; or

(ii)  the functions of the Director of the Office of Management and Budget relating to budgetary, administrative, or legislative proposals.

(b)  This order shall be implemented consistent with applicable law and subject to the availability of appropriations.

(c)  This order is not intended to, and does not, create any right or benefit, substantive or procedural, enforceable at law or in equity by any party against the United States, its departments, agencies, or entities, its officers, employees, or agents, or any other person.

President Donald Trump ordered his Treasury Department on Friday to review measures put in place by the Obama administration, setting the stage for a rollback of regulations that were intended to curtail corporate tax evasion and prevent another financial crisis. ...

“This has to do with the complexity of tax regulations,” Treasury Secretary Steven Mnuchin said at a briefing before the signing on Friday. “The president wants to make clear to the American people that we are going to fix the tax code.” ...

The presidential order asks Mnuchin to review the tax regulations imposed by President Barack Obama in 2016. Those include efforts to clamp down on corporate inversions — in which U.S. companies merge with foreign companies to take advantage of lower tax rates abroad.

Viewed alone, undoing the rules would appear to be at odds with Trump’s campaign pledge to reduce incentives for companies to invert.

Last year Obama’s Treasury Department, concerned about Pfizer’s $152 billion bid to acquire the Botox maker Allergan, issued rules to thwart inversions. Among those efforts were regulations to prevent moves like “earnings-stripping,” in which a U.S. subsidiary borrows from a parent company and uses the interest payments on the loans to offset its earnings, to make inversions less attractive financially.

The uproar over inversions dogged a number of transactions over the last five years, from Burger King’s takeover of Canadian chain Tim Hortons to drugmaker AbbVie’s planned acquisition of an Irish rival, Shire.

But the major target of the outrage was the Pfizer-Allergan deal, by far the biggest effort by a company to give up its U.S. citizenship to cut its taxes. Pfizer executives braced themselves for blowback from the Obama administration — but were surprised by how aggressively the White House fought the deal. Within a few months, Pfizer and Allergan surrendered and ended their agreement.

Robert Willens, an independent tax consultant, said reversing these rules would be a gift to Wall Street bankers and lawyers who have complained that international deal making has been hampered by the regulations. “They’ll be dancing in the streets and jumping for joy,” Willens said.

Other than the anti-inversion regulations (Sec. 385 and Sec. 7874), I don't think there are any regulations issued in 2016 that are not closely tied to complexities that Congress put in the law.