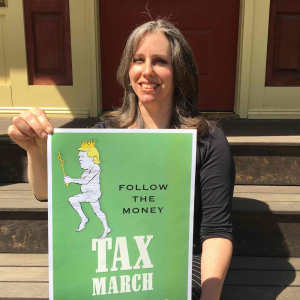 The Guardian, Tax March: How a Law Professor Sparked a Global Event to Demand Trump's Returns:

Inspired by the Women’s March in January, law professor Jennifer Taub ‘impulsively’ called for action. Now people from New York to Tokyo are preparing to take to the streets.

Donald Trump’s adviser Kellyanne Conway accidentally inspired a law professor and a comedian to convince thousands of people to take to the streets this Saturday to demand that the president release his tax returns.

The day after attending January’s Women’s March in Boston, Jennifer Taub was proudly looking at photos and coverage online when a video of Conway popped up. Conway, Trump’s former campaign manager, declared that Trump was “not going to release his tax returns” and that voters didn’t care.

“That annoyed me ... people do care,” said Taub, a law professor at Vermont Law School, whose research and teachings focuses on corruption, corporate political spending and the links between politics and money.

Buoyed by the huge turnout at the Women’s March, she posted on Twitter.

“I traffic in ideas that people usually ignore,” explained Taub. “I invest years in research, writing and crafting a book, meticulously searching and referencing. I’ve testified before Congress. And nothing happens.”

But this time was different. Her post started getting hundreds of retweets. ...

More than 130 events will take place this Saturday, with a full list of times and places available on the Tax March website. The DC march, which kicks off at 12pm at the US Capitol west front fountain, is expected to be the biggest: more than 50,000 people have listed themselves on Facebook as interested or attending. ...

For Taub, Trump releasing his tax returns is important for two reasons: the first is “the tradition of transparency”, and the second is the public’s ability to identify conflicts of interest between Trump’s real estate and business holdings and his domestic and foreign policy. “I believe the president should serve in the public interest and not for his own personal profit,” she said.

Tax reform is Trump’s next big legislative effort and Taub wants to push for “tax fairness, and inclusion of everybody in the economy so we can not just survive but thrive”.

ruralcounsel: (1) Maybe some people are protesting just because it's a fun community event. (2) the President is merely the employee of the citizens, he/she serves them and if they want to request tax returns (to shore up any doubt about conflicts of interest or for any other reason) that's their prerogative.

tax3: Identification of any issues that may influence his decisions. Those issues where his position enables favorable outcomes for himself, his family and friends over the needs of this nation.

Let’s be honest. If the election turn out differently and that president also withheld similar information, would those siding with presidential confidentiality remain steadfast in their position or will they be reaching for their pitchforks?

He’s hiding something! We demand that the president produce his birth certificate tax returns!

How about how much money he was lent by Russian oligarchs, or Chinese lenders? What conflicts of interest between policy and profit do we not know about? How about to what extent he will benefit from his own tax proposals? Just killing inheritance tax could save his family literally billions.
The questions could go on and on.

Rural counsel. The point isn't that Trump must legally disclose his tax returns. The point is that he lied through his teeth when he said he would disclose them. Further, there is a First Amendment right to demand, request, suggest, or beg Trump to tell the truth and do as he said he would.

This is quite irrelevant and somewhat childish. The idea seems to be that, if we pretend hard enough, Trump won't be the President. It doesn't work that way.

Can someone please explain to me what people expect to see on there?

If I were DT, I'd tell them to go pound sand. If they changed their message from "demand" to "request", I'd at least consider it. The protesters position is arrogant and as we all know, not legally required of either a POTUS candidate or POTUS themselves. Perhaps the protesters should be more aware that our country protects the individual from the whims of the crowds. That is more important than any desire they have of peaking into his personal affairs.