On the heels of the February 2016 multistate bar exam (MBE) scores reaching a 33-year low, including a sharp drop in recent years, and a small improvement in the July 2016 test while scores remained near all-time lows, we now have the February 2017 statistics, courtesy of Pennsylvania (PDF). After a drop from 136.2 to 135 last year, scores dropped another full point to 134. It likely portends a drop in overall pass rates in most jurisdictions. This is the lowest February score in the history of aggregated MBE results. 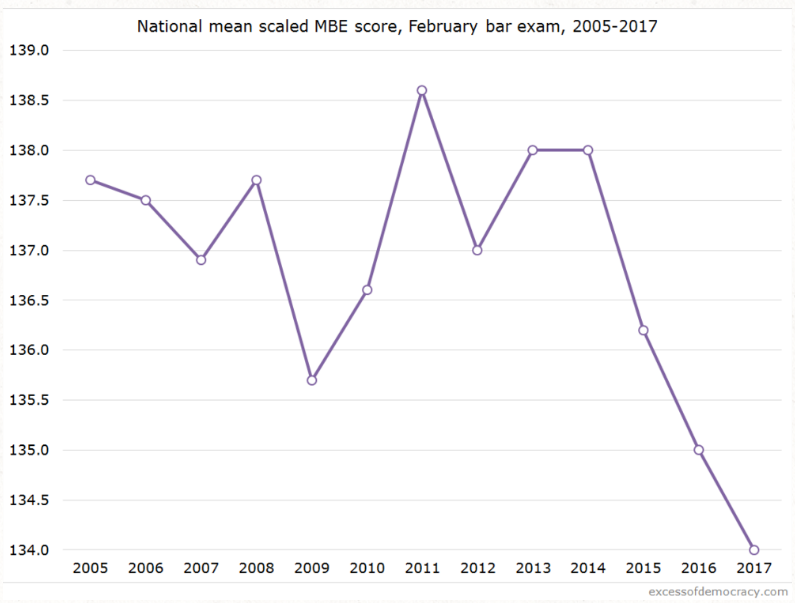 So the problem of declining MBE scores and bar passage rates is also due to the quality of education provided by law schools. Clearly, many law schools are failing their students. The old model of hiring someone to be a law professor because they have “elite” credentials (went to a T8 school, Federal Clerkship, worked 2 years at a top law firm) is broken. The schools could innovate and hire teachers versed in modern approaches to pedagogy. The schools could revamp their curriculum. Unfortunately, these kind of changes are not happening because the goal of many law schools is to profit off of Federal student loans, not to actually educate students.

Further proof that the intellectual quality of students choosing to go to law school is just not what it once was. If the schools themselves continue to put off the realization that, below a certain cutoff LSAT, it's "garbage in, garbage out", and the ABA continues to put off action, then maybe the Department of Education, which funds the whole catastrophe, should step in and restore standards.

What is the statistical significance of a drop of 1 point? 2 points? Be helpful to know the percentiles for these scaled scores.

Who knew that ABA Standard 501 had a secret clause in invisible ink that says "To be disregarded if your law school really needs the money"?

Q: What do too many low caliber schools call applicants with low scores and a poor chance of bar passage?
A: A revenue stream
TRAGIC

looking forward to the forthcoming letter from deans calling for the abolition of this racist, sexist, blah blah blah exam (to cover their bad admissions decisions).