The Political Economy Of Administrative Bloat In American Higher Education 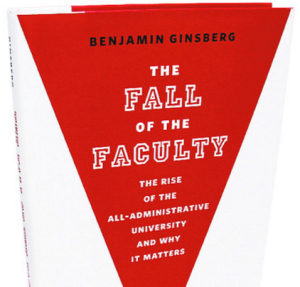 The cost of higher education in the United States has risen dramatically in recent years. Numerous explanations have been provided to explain this increase. This paper focuses on one contributing factor: The dramatic growth in the size and expense of non-academic administrators and other university bureaucrats, which has outpaced the growth of expenditures on academic programs. Given that university faculty are typically viewed as the constituency that primarily controls universities, this growth of non-academic employees and expenses appears to be anomalous. Some theories are provided to explain this transition.

Something has happened to the structure of higher education in American universities. Universities have increased spending, but very little of that increased spending has been related to classroom instruction; rather, it is being directed toward non-classroom costs. As a result, there has been a growth in academic bureaucracies, as universities focus on hiring employees to manage or administer people, programs, and regulations. Between 2001 and 2011, these sorts of hires have increased 50% faster than the number of classroom instructors. This trend toward growing academic bureaucracies has become ubiquitous in the landscape of American higher education.

With this increased growth of academic bureaucracies, there has also come increased focus by those highlighting the problems resulting from this growth. In a recent book The Fall of the Faculty, Benjamin Ginsberg describes the problem as such:

Every year, hosts of administrators and staffers are added to college and university payrolls, even as schools claim to be battling budget crises that are forging them to reduce the size of their full-time faculties. As a result, universities are filled with armies of functionaries – vice presidents, associate vice presidents, assistant vice presidents, provosts, associate provosts, assistant provosts, dean, deanlets, deanlings, each commanding staffers and assistants – who, more and more, direct operations of every school. Backed by their administrative legions, university presidents and other senior administrators have been able, at most schools, to dispense with faculty involvement in campus management and, thereby reduce the faculty’s influence in university affairs.

What makes administrative bloat (and excessive size and price) survive in a competitive market? Regulation requiring certain administrative mechanisms and results. Which also acts on other firms, although generally with less novelty.

I would venture that administrative, compliance, and internal audit costs associated with Federal grants, financial aid, and contracts are no small sum. The costs of preventing "waste, fraud, and abuse" in Federal programs only travel in one direction.

Regulatory compliance drives some of this bureaucratic bloat. ABA reporting requirements, FERPA, Title IX, IRBs and HHS human subjects protocols, etc. And then you have the persistently rotten economy that paradoxically pushes law schools to hire more staff, e.g. development as well as career placement staff and all the administrative bloat surrounding academic centers that were created because the school needed to accept financial gifts due to the down economy.

Every year education cries that if only educators were paid more, academic achievement of students would rise. On that, they always get more money yet somehow educators in the classrooms are still poorly-paid and academic achievement in the US continues to deteriorate. Yet education gets local and state taxes, federal money, lottery money, gambling money, cereal box and soup label money, parent fund-raisers, supermarket sales % money... unbelievable how much goes into education, and where does it go? Not to requiring that ignorant US educators actually have competencies in the subjects they were ostensibly hired to 'teach' rather 'facilitate', since 'teaching' is not actually in favor. The US classroom run by 'educators' as compared to overseas classrooms and real teachers that are required in other countries is pathetic. US students arrive at university unprepared, but colleges and universities just make up easy diplomas. The big universities are opening up slick program offices overseas promoting their 'vision.' Universities feather their nests - every year something new in the physical plant that makes the administrators' work days more comfortable. Their admissions and academic advisors are coached to slyly encourage students to add a full year on to their degree studies - more money per student. We've watched numerous of them at various schools in action. They aren't honest and they withhold information. There is no possible way a $60,000 tuition is going largely to the student. It's subsidizing everything else that has little or zero benefit to the paying student, worse if as usual the student will spend the next four decades paying off the debt. Want to stop this in a hurry? Require that universities divest - back to basics of classroom instruction. Research should be independent with independent financing, as should be sports. Get out of the utopia lifestyle business of a fantasy bubble world of dorms, cafeterias, massage rooms. Students can grow up at age 18 like their non-university age mates and learn how to rent from real landlords, how to take care of themselves like grown-ups - shopping cooking cleaning and commuting. Big universities now have created the 'casino effect' of depressed neighborhoods around them that get no monetary benefit from these insular behemoths. After dealing with US university staff, faculty to administrators, plainly they suffer from the narrow-mindedness of this little world of one viewpoint, the right coffee to drink, the right clothes to wear, the right opinion on everything - but greed rules, not the best interest of the students. It's that bad. It didn't used to be this awful, but it is now. Using overseas universities instead - cheaper, more actual instruction, three years for a Bachelors, not four or five. Compared to the international competition, US universities have become inferior and are not trustworthy. US university students have a very bad reputation overseas for drinking their way to through their 'semester abroad' so much that overseas universities run a separate set of easy courses and separate dorms just for American students so they can drink, spend lots of money and stagger into class the week before leaving and still get an A so their GPA at 'home' is maintained. It's pathetic - one big wink-wink between universities that US students who have been cheated of a good education from day one have to pay for the rest of their lives in inadequate preparation for any career or work. Enormous amounts of money were supplied to adults to provide academic/skills training, yet somehow it's always the US students' fault for being somehow 'inadequate.' No. Everything youth learn is from the adults who are in charge of them. Look at who 'molded' them for 16 years to be the way they are. Learning how to be a shallow 'poseur' isn't what people want from universities.

There are several reasons for the rapid growth in administrative staff. First, never underestimate the tendency of empire building in bureaucracy as described decades ago by Parkingson's Law. Next, look at the regulatory compliance demands, most notably from the federal government but also from many state governments for public universities. It takes a lot of people to generate all of that useless paperwork and to apply for grants. Third, there seems an effort to create a job market for people with otherwise unemployable degrees (e.g. "Angry Studies").

Ever read the Peter Principle? Bureaucratic bloat is a natural consequence...

I'm not sure that the assertion that faculty do less administrative work now than in the past really holds true -- it's just that it's now called "service," and can include anything from planning departmental events, graduate admissions, faculty hiring, or serving on the faculty senate, etc.

The increasing reliance on adjunct labor, too, is unsustainable. Such jobs are poorly remunerated, both in terms of actual pay as well as in benefits (which are quite often non-existent). While a great many adjuncts care deeply about their work and their students, the fact remains that a two-tiered system has emerged in which "contingent" faculty do much of the same work as tenured or tenure-track faculty do (including research, which is virtually a prerequisite for advancement), but have no say in departmental or university governance, are barred from holding positions in many disciplinary societies, and have fewer opportunities to attend conferences or otherwise do the kinds of things that are expected for career advancement.

“Greene et al also find that spending per student from 1993 through 2007 increased by 61.2 percent for administration while spending on instruction increased 39.3 percent."
If that’s in real terms, the situation is a lot better than I thought.

We really need careful analysis of spending categories. Researchers teach less, but there are lots more non-tenure-track staff. That should be accounted as lower quality but higher quantity of teaching inputs. Note that tenuretrack teaching loads have fallen, so spending on research faculty should be allocated maybe 40% to teaching now, 50% in 1980. Note that despite this, research spending may have fallen, if more of the instructors are now non-researchers.

Also, I suspect that faculty are doing less administrative work than they used too--- no input on admissions now, for example, in many places. So in the accounting, that should show up as less administrative spending. Faculty are more expensive per hour than the clerks who now do admissions. Of course, they’re smarter too, so we’d expect to see the quality of administration falling. A lot of the stupid political correctness is due to the faculty doing less work in things like handling complaints and administrators doing more.

Declines in state appropriations, administrative bloat, employee health care costs (generally considered to account for 8 to 10 cents of every tuition dollar, on average), soaring IT and other tech costs, institutional debt service (American colleges and universities themselves owe around $300 billion), Veblen Good Theory, etc., etc., etc. The "dramatic" rise in college tuition has many causes.

But what drives this, in turn? If consumers are obsessed with the rankings and other competitiveness of universities, those who focus on these issues get more powerful. You can't have it both ways.

In 2012, I moved back to the town were I attended college in the late 1960s. The big change is student regimentation. The campus is covered with signs telling students what they must or must not do.

Still more depressing that that students, in the pursuit of the proper credentials, endure all that without a murmer of protest. And the students probably have it better than the faculty.

How's this for an explanation: In every industry, we have more management than we used to. As goes the nation, so goes education.