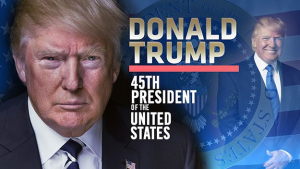 Following up on my previous posts (links below): National Law Journal, The 'Trump Bump' for Law Schools Is (Kind of) a Thing:

Is the Trump administration's early turmoil a gift to legal education?

Pundits have speculated that Washington's recent turbulence will spur a surge in law school applicants, given the armies of lawyers—hailed by many as defenders of democracy—that assembled at airports around the country in the wake of President Donald Trump's so-called Muslim ban.

Despite the hype, most law schools have yet to see a significant Trump bump, though some report that recent political events are foremost in the minds of many of this year's applicants. Admissions officials at law schools who have seen an increase in applications say it's difficult to attribute that rise to any one factor, but they allow that Trump is one of the many variables contributing to greater interest in the law, from both his supporters and those who oppose his policies.

If any school can make a case for a Trump bump, it may well be George Washington University School of Law, where applications are up 9 percent over last year. Admissions Dean Sophia Sim stopped short of attributing that increase directly to Trump, but she said the political climate has emerged as a major theme this admissions cycle. ...

Nationwide, the numbers don't reflect inspiration, at least not yet. Applicants to all American Bar Association-accredited law schools were down 1.5 percent as of March 3. ... A late surge in applications is still possible. The number of people taking the Law School Admission Test in December was up nearly 8 percent. The council has yet to release the number of LSAT takers in February, which is the final opportunity to earn a score before the application period ends at most schools.

PaulB is correct about the LSAC numbers. The only notable increases are at the low LSAT bands, and those aren't the students that most schools are looking for.

This happened after Nixon too, I think.

Given the probability that GradPLUS will not survive the HEA reauthorization under this president and Congress, I would argue that this is the worst possible time to go to law school. Not to mention that, contrary to Trump's campaign rally concern-trolling about student loan debt, the admin's first action on student lending was to remove Obama-era regulations preventing student loan administrators and guarantors from levelling collection & default penalties on borrowers who started repaying quickly after a default. If memory serves, those penalties can each top 25% of the underlying balance.

If you follow the weekly updates at LSAC, there's no sign of this happening. Most schools aren't accepting applications by now but maybe there will be a huge surge at Cooley and Florida Coastal this summer in response to Trump.