New York Times, Profitable Companies, No Taxes: Here’s How They Did It:

Complaining that the United States has one of the world’s highest corporate tax levels, President Trump and congressional Republicans have repeatedly vowed to shrink it.

Yet if the level is so high, why have so many companies’ income tax bills added up to zero?

That’s what a new analysis of 258 profitable Fortune 500 companies that earned more than $3.8 trillion in profits showed [The 35 Percent Corporate Tax Myth: Corporate Tax Avoidance by Fortune 500 Companies, 2008 to 2015]. 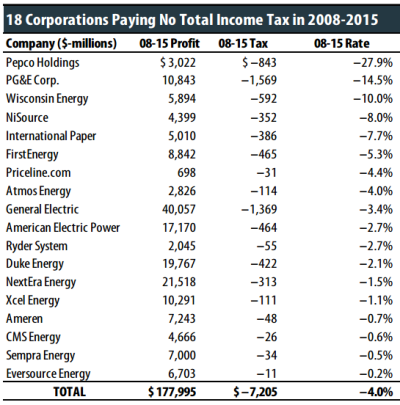 Although the top corporate rate is 35 percent, hardly any company actually pays that. The report, by the Institute on Taxation and Economic Policy, a left-leaning research group in Washington, found that 100 of them — nearly 40 percent — paid no taxes in at least one year between 2008 and 2015. Eighteen, including General Electric, International Paper, Priceline.com and PG&E, incurred a total federal income tax bill of less than zero over the entire eight-year period — meaning they received rebates. The institute used the companies’ own regulatory filings to compute their tax rates. ...

How does a billion-dollar company pay no taxes?

Companies take advantage of an array of tax loopholes and aggressive strategies that enable them to legally avoid paying what they owe. The institute’s report cites these examples:

Tax reformers have long argued that the nominal 35 percent federal rate on corporate profits more often than not functions like a strike-through price — an artificially inflated number that sounds high but rarely applies. Thanks to a variety of loopholes and tax-dodging methods, those 258 corporations paid an average rate of 21.2 percent. (Other studies, including a new one by the Congressional Budget Office that compares corporate income tax rates in various countries, have found that average and effective rates in the United States are lower than the nominal rate.)

And think of the man-hours and otherwise wasted expense of all the planning, scheduling, and manipulations that are needed to plan and carry out all this business activity in light of the corporate tax rate and all the assorted tax breaks, credits, amortization, depreciation, and other deductions.
And that is why many of us have jobs ... tax planning is big business within big business.

From a cursory search of the usual sources (Forbes, IBD, etc.), the U.S. corporations that pay the far and away highest effective tax rate, and also $ billions in taxes, are the ones everybody on the left loves to hate: Chevron, Exxon, Walmart just to name a few.

Why not just switch to a small tax on gross revenue, something in the 1-5 percent range? This would greatly reduce compliance costs and it would reward companies for being more efficient, not for being better at employing tax shelters. It would also greatly increase income from corporations large enough to afford armies of tax lawyers.

A cursory look at this list shows that most are electrical utilities. These are not companies with earnings stashed abroad or using transfer pricing schemes to book profits in foreign lands with minimal taxes. The obvious explanation is the difference between tax and financial reporting of depreciation. Rather than being companies that make lots of money but pay no taxes, a logical explanation is that state regulators insist on lower depreciation rates in order to keep electric bills down. These companies are far less profitable than what they report to their shareholders.

$600 BN in annual tax compliance costs that should be put to work in the businesses; throw out the Code and let's get one for this century and this economy. The last major change was in 1986, before that was 1956......we.re a year behind.

"Why not just switch to a small tax on gross revenue, something in the 1-5 percent range?"

Jim, you forget there's a multi-billion $ bureaucracy, as well as a multi-billion $ tax accounting industry, that want nothing better than to keep the entire federal tax code, both individual and corporate, as complicated and onerous as possible.