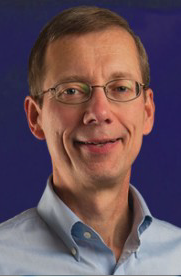 Paul L. Caron has been named the Duane and Kelly Roberts Dean of the Pepperdine School of Law. Caron, currently associate dean for research and faculty development and professor of law, will formally begin his responsibilities as dean on June 1, 2017.

“Since his first days as a distinguished visiting scholar through his selection as a tenured professor and now his candid and strategic participation in this search process, I have admired Professor Caron for his keen intellect, generous outreach to others, and his sterling reputation within the national legal community,” says Pepperdine president Andrew K. Benton. “It will be a privilege to work side-by-side with him to advance the Pepperdine School of Law, an entity we both hold in high esteem. He will be, I believe, a remarkable law dean.”

“Paul Caron is a highly regarded scholar and wonderful mentor to our law school students,” says Pepperdine provost Rick R. Marrs. “He has a comprehensive knowledge of legal education in our country and a compelling vision for the place of our law school in that landscape. I eagerly anticipate working with him as he helps us achieve our goal to move the law school toward national prominence, providing our students with the highest educational experience and empowering them to become leaders in their communities.”

A widely respected expert in tax law, Caron has written over 50 books and scholarly articles and is the publisher and editor of Tax Prof Blog, the most popular tax blog on the Internet. He is also the owner and publisher of the Law Professor Blogs Network of more than 50 blogs in other areas of law edited by law professors around the country. He was named the third most influential person in legal education by the National Jurist in 2016 and has been listed as one of the 100 most influential people in tax and accounting every year since 2006 by Accounting Today.

"I am honored to be chosen as the next dean of this great law school at this important point in its history, following in the footsteps of Deanell Tacha, Ken Starr, Richard Lynn, and Ron Phillips," shares Caron. "I look forward to building on their work to advance Pepperdine's unique position in legal education by combining academic and research excellence with a deep-rooted commitment to our Christian mission that welcomes people of all faiths and backgrounds."

Caron received his LLM from Boston University, JD from Cornell Law School, and AB from Georgetown University. He and his wife, Courtney, reside in Malibu.

Pepperdine is grateful to Dean Deanell Tacha for six years of remarkable leadership at the School of Law. The University also wishes to thank the search committee and all in the University community who participated in the search process.

Please join us in congratulating Professor Paul L. Caron as dean of the School of Law.

As they say in Latin: Mazel Tov.

As a graduate of one of the many cliche carbon copy Southern California law schools, I envy Pepperdine and its unique (woefully needed) place in American legal education. I've often felt compelled to donate to it over my own alma mater...you could certainly capitalize on that sentiment as dean, i know I'm not alone. Congrats to you and Pepperdine, and I must admit that I selfishly hope that this blog will not suffer due to your increased responsibilities!

Superb choice. Congratulations to you, the law students and Pepperdine.

Congratulations on your promotion! Soon you will look forward to returning to just being a professor after a couple years of carrying the management load.

Congratulations. You, sir, are a great American. Pepperdine and the nation are blessed.

Congratulations, Paul. This is the kind of news we like to hear.

Congratulations! Well deserved for you and smart move by Pepperdine! I, too, hope that TaxProf blog continues, as it was the first tax blog I ever read and an inspiration for mine.

Congrats from a frequent (non-tax) reader!

Maybe it's not the most appropriate thing a person can say to Pepperdine's new dean, but Mazel Tov, Paul. You will do a great job as dean there.

Could not have made a better choice. Congratulations, wonderful news! Very deserved.

Congrats, Paul! Let us know if you need some temporary support keeping the Blog going.

Congratulations! A very wise move on the part of Pepperdine!

Congratulations, Paul! (But, please don't let the new responsibilities take away from the TaxProf Blog.)

Condolences on your new position. I sure wish you good fortune and a happy faculty, and students who are willing to learn without griping about how hard it is. I shall miss your blog/listserv, assuming you will have lack time to run it and be dean at the same time, though it seems you don't get much sleep as is. Ralph Brill

Congratulations. I hope this affords you further opportunity to influence and touch the lives of the students.