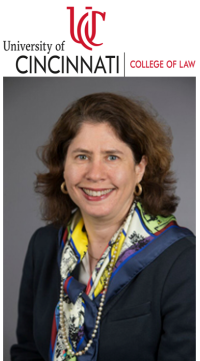 Following up on my previous posts (links below):  Cincinnati Enquirer, UC Law School Dean Out For Now, Exploring Legal Options:

The dean of University of Cincinnati's College of Law, Jennifer Bard, was placed on administrative leave Wednesday. Interim provost Peter Landgren made the announcement in an email Wednesday to the law school community. ...

Bard, who joined UC as dean in July 2015, said in a statement she was "surprised at the precipitous action the University took so soon after this matter became public and revealed the deep divisions within the Law School Community and tensions over the use of the school's resources."

Under Bard's leadership, applications grew, more students passed the bar, the school’s national reputation improved, the Board of Trustees approved a new building and fundraising increased, according to Bard.

Bard said she was recruited to reduce a "significant financial deficit" and "establish sound financial controls," which she has made significant progress in doing.

She said Landgren's action raises serious questions about UC's failure to support the financial goals for which she was hired and the due process to which she is entitled. Bard's legal counsel is currently evaluating her legal options, the statement said.

The University of Cincinnati placed its College of Law dean on administrative leave Wednesday shortly after she blamed deficit-closing efforts for upsetting faculty members who had been organizing against her leadership.

Dean Jennifer Bard was placed on leave after just 21 months on the job. Peter E. Landgren, Cincinnati’s provost and interim senior vice president for academic affairs, announced the move in an email addressed to the College of Law community, saying he is firming up a transition plan for the college. He said his decision followed a “thorough evaluative process,” according to the email, which was posted by TaxProf Blog. ...

Bard had said she upset a small group of faculty members while making progress in cutting a multimillion-dollar deficit at the College of Law, and that faculty members tried to stop her by taking advantage of a leadership vacuum created by interim leaders at the university. Controversial savings proposals included consolidating the UC law library into the university library system, requiring pre-travel approval and requiring the submission of travel receipts. Bard was hired to eliminate a deficit at the law school, she told the Business Courier in a statement this week.

In a statement, Bard said she was surprised at the precipitous action the university took so soon after the matter became public. "This action was unexpected and raises serious questions about the University’s failure to support the financial goals for which I was hired and the due process to which I am entitled," she said. "We had an agreement for a process that included bringing in a mediator to address these issues and I am deeply disappointed that the Interim Provost chose to close down this process and take this unprecedented action to frustrate the College of Law’s progress."

Bard's counsel, Krantz & Berman partner Marjorie Berman, said she's evaluating Bard's legal options now. "Dean Bard faced enormous challenges in resolving serious and long-standing financial issues at the University of Cincinnati School of Law," Berman said in a statement. "The opposition she faced from some faculty was predictable; but the lack of support and the failure of the Interim Provost to honor his commitments was completely unexpected and counter-productive."

In the midst of a battle with faculty members over her cost-cutting measures, there was apparently one potential cost University of Cincinnati law dean Jennifer Bard failed to take into account: her job. The school ousted Bard less than two years into her five-year term. The unusual move came after repeated clashes with some members of the faculty, apparently over Bard's efforts to reduce a significant operating deficit. For her part, Bard said in a written statement yesterday that she was just doing what she was brought aboard to do: get spending under control. She also characterized her dismissal as "unexpected." “We had an agreement for a process that included bringing in a mediator to address these issues and I deeply disappointed that the Interim Provost chose to close down this process and take this unprecedented action to frustrate the College of Law’s progress," Bard said in the statement.

It wasn't a "small group" of faculty. Complete mendacity