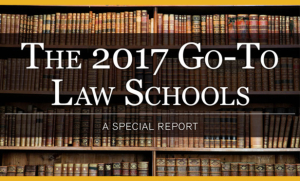 New associate hiring ticked up slightly in 2016, with the country’s largest 100 law firms bringing on 3,521 new law school graduates. Among the 50 law schools most popular with those employers, 24 percent of last year’s graduates landed associate jobs—up one percent over the previous year.

We’ve ranked the top 50 law schools by percentage of 2016 juris doctors who took associate jobs at the largest 100 firms. The selection of those 100 law firms was based on lawyer count—as identified on the NLJ 350, The National Law Journal’s annual survey of the nation’s largest law firms. We also examined tuition at the schools that produced the most Big Law associates, and we ranked the schools with the most alumni promoted to partner in 2016.

The Top 50 Go-To Law Schools:  We’ve ranked the top 50 law schools according to the percentage of their 2016 juris doctors who took associate jobs at the largest 100 firms.

Columbia Law Pulls Ahead of the Pack
Columbia Law School's class of 2016 killed it on the Big Law recruiting market. Twenty-four percent of law grads at the top 50 schools landed associates job at the largest 100 firms.

Landing a Dream Job Requires Digging
How can law students navigate the interview process to ensure that they find the best firm for them, not just for the summer but for a full-time career?

The Top 50 Go-To Law Schools
These schools sent the highest percentage of 2016 graduates to the largest 100 firms.

Go-To Law Schools: Associates to Partners
These schools saw the most alumni promoted to partner in 2016

Go-To Law Schools: Tuition
Here’s a look at how much it costs to attend a law school that has a strong Big Law track record.

Go-To vs. U.S News
How our rankings match up with theirs.

Explore the Data Behind the Go-To Law Schools
For the fifth year in a row, we are making all of the data from our Go-To Law Schools report on large firm associate hiring available in a searchable format.

This is not an appropriate comparison for law schools. How about the feeder schools for the 5 or 10 largest law firms in each state?

"not just for the summer but for a full time career"

How long does that last? I met an awful lot of former biglaw associates in non-prestigious circumstances when I was practicing. They seemed to have quite a few years left in their careers.

Whoa! a school makes the top 25 by sending a mere 14% of its grads to these firms? Didn't 3rd tier schools routinely place 14% or more of their grads at these firms just a decade ago? Wow! times are tough...