More On The 'Full Citizenship Project For All Law Faculty' 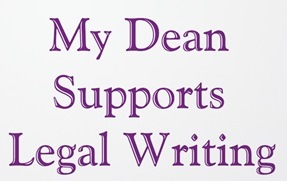 Legal Skills Prof Blog: The Role of Legal Writing Professors in the Academy: A Reply to Professor Jason Yackee, by Scott Fruehwald:

The equal pay argument makes no sense. LRW faculty, like tenure-track faculty, are recruited in a free labor market. At my school, we get a hundred applications from local attorneys every time we advertise an LRW position. Those folks are thrilled to escape legal practice for a job that pays half of what a tenure track faculty job would pay. Tenure track faculty, in contrast, are recruited on a very competitive national market. If you tried to hire a tenure-track faculty member for $75,000 per year, you would get only the worst of the bunch to accept your offer. On the other hand, you very well would be able to get a very fine LRW instructor. Raising LRW salaries to tenure track levels in that circumstance would be a financial travesty. You would, in essence, be telling students that they need to pay much more in tuition than they otherwise needed to pay, in order to give a salary windfall to people who very willingly would have worked for much less.

Yes, you could run a law school that hires its tenure-track professors from the local legal market, and it would be a lot cheaper than hiring them through the AALS. But would this be a good law school? It certainly wouldn’t be one that does a particularly good job of engaging in the study of law at an intellectually high level. We make fun of law prof research quite a bit, but it is still hard to do, and most practicing lawyers don’t have the interest in or capability to do it. For law schools attached to major research universities, such a model of hiring would be hugely problematic as well. How would you ever get your law professors through the University tenure committee?

Anyway, the case for “equal pay” for LRW faculty would be more compelling if LRW faculty (and clinicians) were hired through the AALS process, and held to the same standards of prior academic accomplishment and promise of engaging in intellectually serious and interesting research, held to the same tenure standards, and so on. I guess, though I don’t know for sure, that most LRW faculty are recruited from the local legal market. I guess, though I don’t know, that most LRW faculty aren’t expected to conduct legal research at a high level. And so on. The point is that LRW faculty candidates and tenure-track faculty candidates compete in very different markets (usually), and have very different expectations placed upon them. Neither “deserves” a particular salary though. The suggestion that this is what I meant is just silly rhetoric. Tenure-track faculty get higher salaries because they compete in a market in which there is a lot of demand for candidates that have a particular, and relatively rare, set of attributes, skills, and interests. LRW faculty compete in a market in which there is less demand for a different and more common set of attributes, skills, and interests.

I will first respond to Yackee's specific comments, then I will discuss the role of legal writing professors in the 21st-century law school in general.

Here, Yackee makes another ignorant statement based on his lack of knowledge of what legal writing professors do: “Tenure-track faculty get higher salaries because they compete in a market in which there is a lot of demand for candidates that have a particular, and relatively rare, set of attributes, skills, and interests. LRW faculty compete in a market in which there is less demand for a different and more common set of attributes, skills, and interests.” This statement couldn’t be more wrong. Legal writing professors are specialists just like doctrinal professors. It takes special expertise to teach students how to write like a lawyer. Not every attorney can teach legal writing. For one thing, a legal writing professor has to know how to teach–to be an expert teacher. This is one skill that many doctrinal professors lack.

Professor Yackee also presents an out-dated view of the legal academy: “It certainly wouldn’t be one that does a particularly good job of engaging in the study of law at an intellectually high level.” This is Langdell’s concept of law as a science. This is like saying we should still light our home by candles or that we should travel by horse and buggy.

Yes, law school is intellectual, but in the 21st century, law school’s major purpose is to prepare students to practice law. (I would argue that preparing law students to practice law is intellectual.) Law students demand it, and our society requires it to function. Our students will practice law, not just sit around the agora having philosophical discussions. You say “We make fun of law prof research quite a bit, but it is still hard to do, and most practicing lawyers don’t have the interest in or capability to do it.” If this is so, why do you spend your time preparing lawyers to be researchers rather than practicing attorneys?

Best Practices for Legal Education Blog: Preaching to the Choir? A Request for Inclusion in the Call for Equity among Law School Faculty, by Elizabeth Ann Tarloski (William & Mary):

Although the Full Citizenship Statement that is seeking signatures does not exclusively affect women, it could bridge one of the many disparities that exist among primarily tenured doctrinal faculty and legal writing, clinical and academic support faculty. ...

I wonder if, because I am a woman and in a visiting position, does my opinion count as much as those the petition is seeking parity with? How much should we be actively seeking out those already in tenured positions versus preaching to, and seeking support from, the choir?

My own imposter syndrome voice sneaking up on me tells me I have no place writing this blog, and I try to silence her. I have been teaching for less than two years and I admittedly know less than many of my colleagues about this issue. But I believe my voice, as well as others who are new to the field, and those who have been in the trenches and already received tenure, are all important voices in the conversation.

I hope that conversations surrounding this Full Citizenship Statement take place in law school faculty meetings around the country where the very people this petition impacts, may very well be absent. I wonder if the conversations that may take place will reflect an instinctual resistance to adopt a structure that seemingly threatens to decrease one’s own power, pay or voice, or if there will be support. Just as it is vital for men and boys to be an active part of the conversation on gender and gender disparities, so too must those who are already in the privileged position of tenured faculty be an active part of the conversation around this petition.

We may struggle as teachers in how to address privilege in the clinical classroom. It is not an easy topic, notably when we have to take it out of the context of the classroom and apply it to our own lives and careers. It forces us to accept that we may have benefited from the advantage that race, sexual orientation, academic pedigree or economic upbringing may have offered. But privilege also offers the advantage of a platform and a voice, and in a movement like this, that is important. The call for equity can lessen the gap by knocking down boundaries created by arbitrary distinctions between those that meet the current qualifications for tenure track positions and those that do not. Talking about hierarchy, politics, power and pay can be incredibly uncomfortable when dissecting it within the institutional hierarchies we exist in. But now, it is necessary.

Given the regulatory capture that has taken place in legal writing, I'm frequently embarrassed these days but the decisions our "leaders" make, but this one takes the cake. To those who read this blog, please note that many in the LRW community not only disagree with this campaign, but are mortified that it is even taking place.

No data, no evidence, assorted with a mix of cultural Marxism and personal attacks. Protip: this might be why you find yourself in the circumstances you are in when you think this is rational or constructive discourse. But keep pondering the big questions of intersectionalism.

Has one law school ever recruited a lateral hire of a legal writing professor from another law school? If the practice is not common, then either they aren't underpaid or there is a golden opportunity for some law school to leap to the front ranks by hiring those underplaced writing professors.

LRW faculty should have equal status if hired through processes where they were subject to equivalent standards or bargained for such status. What many failing schools do though, is convert existing contract faculty to a higher status which those existing faculty never bargained for. This creates significant institutional resistance and may lead to worse outcomes than scrapping existing faculty and starting anew with clear standards and dedicated searches to hire people who know in advance what the standards are and what their status will be.

I've heard it said among "doctrine" professors that when legal writing profs make these arguments, the best response is just to keep quiet. Most doctrine professors basically agree with Yackee, but saying what most think makes one a target. Fruehwald's post tends to confirm that view.

Go to almost any school's website and look at the credentials of the LRW faculty compared with those of doctrinal professors. The former typically have credential that are MUCH more common. Plus those jobs are FAR less competitive than the jobs for doctrinal faculty (which are almost impossible to get). So tell me again why both should be paid equally?

I'm curious about an aspect of Yackee's argument no one has addressed: at the moment, there are far more qualified law professor candidates on the market than there are jobs for them. Yet my understanding is that no one at any institution has suggested lowering their pay or status to reflect this shift in power dynamic. If it's true that the reason LRW profs make less is because there are so many of them and so few jobs available, why doesn't this logic apply to tenure-line faculty? And if the answer is what we all suspect it is--namely, that law schools place different value on the faculty roles themselves, regardless of scarcity--perhaps it would be useful to focus the conversation on that topic and whether it's one people perceive to have merit.