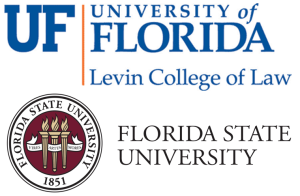 Following up on last year's post, Laura Rosenbury Stakes Her Deanship On Raising Florida's Ranking To #35; Amidst Claims Of Sexism, Her Regime Comes Under Fire, With The Graduate Tax Program Its Flashpoint:  Florida Dean Laura Rosenbury is already halfway toward her goal of being a Top 35 law school with a 7-point improvement in its U.S. News ranking, to #41.

The University of Florida Levin College of Law climbed seven spots in the latest U.S. News & World Report rankings of the nation’s best law schools, placing at No. 41 overall. This rise is the largest year-to-year increase in over 20 years and is the second largest improvement of any law school ranked in the top 50. The Graduate Tax Program held its spot as the No. 1 program among public law schools and No. 3 overall. ...

Since her tenure began in July 2015, Dean Rosenbury has been acutely focused on increasing the national and international profile of UF Law. Because of these efforts, UF Law is on track to join the ranks of the nation’s elite public law schools, better positioning the University of Florida to achieve its goal of becoming a top 10 public research institution.

To support the law school’s ambitious endeavor, the university has made a substantial investment in UF Law’s Merit Scholars Initiative, designed to attract the most highly credentialed students to the law school for years to come. Last year’s pilot program helped bring in an entering class with a median LSAT of 160, up from a 157, and a median GPA of 3.6, up from 3.5. The class is also the most diverse in the law school’s history, with 36 percent identifying as racially or ethnically diverse.

Jeff Harrison (Florida), Riding the Train, Not High on Cocaine, and a Serious Talk with My Dean:

I hate the US News rankings but had to smile when I saw that UF Law had gone up 7 slots. Once I retire I expect it to sky rocket into the top 15 or 20. Some of the increase came by raising the LSAT score of entering students while NOT decreasing enrollment (like other schools) and actually increasing diversity. I personally am not keen that students are recruited and courted like football players but, then again, it is a mixed bag. It appears to be the way the "game is played" these days and if you can do it without cutting class size it's amazing and an example of what a dean with focus, grit, and energy can do. Plus, a higher ranking and higher student credentials likely lead to better employment outcomes. That, in particular, is hard not to like.

I also had to smile because, according to rumor, the tax program has maintained its ranking. It is a testament to the Dean's efforts since people inside and outside the law school, including many grads, had decided the program was being dismantled and spread the word far and wide. Yes, even those who tried to scuttle the program to preserve petty interests evidently had no impact because the Dean was determined to rescue it from its 1950's mentality. Like the regular JD program, I would not be surprised if [it] rose in the rankings given some of the newcomers to the program and one outstanding offer than I hope is accepted.

... by promoting random movement in the "overall" US News rank as meaningful, rather than noise.  This only came to my attention because their PR office actually sent it to me!  They should do some research about whom they send this stuff too!  What's especially unfortunate about press releases like this is that it legitimizes the US News metrics, which can only come back to haunt schools when the "overall" nonsense number moves in the opposite direction for no discernible (or, in any case, meaningful) reason.

In any event, Florida State, which three years ago was ranked higher (#45) than Florida (#49), is not ceding statewide bragging rights:

Erin O’Hara O’Connor, the new dean at Florida State University’s College of Law, sprinkles her language with a boxing expression when she talks about her talented and motivated faculty. She says they “punch well above their weight” — an expression of respect, recognizing and praising them as potent overachievers — as they step into the ring every day to prepare students for the fast-changing legal marketplace of the 21st century. ...  The faculty are fabulously accessible to the students, yet they are rock star solo scholars at the same time.” ...

“We are in many dimensions the best law school in the state of Florida, and we didn’t start there,” O’Connor said.

Fifty years from now when people think of the top three or four state law schools in the country, I’d like them to think of Michigan, University of Virginia, Berkeley and Florida State.”

In this current rankings, the Class of 2015 employment outcomes and bar passage statistics are counted. So if this Dean arrived in July 2015, after that class graduated, I am not sure she deserves all the crdit she is taking here if this rise in the rankings had anything to do with student outcomes.

If the USNews rankings were, say, 70% derived from student body credentials (including transfers), bar pass rates and employment outcomes, and 30% from faculty prestige and institutional resources, it would be a phenomenal metric and would really force the right type of reform.

Hmmm... Top Four Public Law School with Berkeley, VA, and MI? Wait, didn't UT crack the Top 14 this year? And aren't the law schools at Minnesota, Iowa, Wisconsin, UC-Erwin, Indiana-Bloomington, THE Ohio State, Arizona State, Alabama, and Georgia also all in the Top 35? One fails to see how Florida entering the Top 35 will make them a TOP 4 PUBLIC LAW SCHOOL.

I believe that was the FSU dean aiming to be in the top 4.