Syracuse Law Dean, Raised By Adoptive White Parents, Had To Learn To Be Black; He Foresaw Legal Ed Crisis 'Long Before Other Deans Knew What Hit Them' 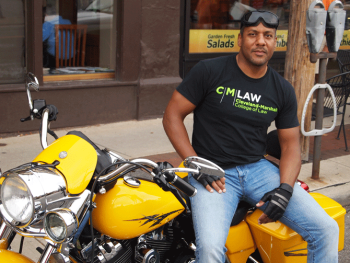 Following up on my previous post, Syracuse Dean (And Tax Prof) Craig Boise: 'The Only Harley-Riding, Piano-Playing, Calf-Roping Law Dean In The Country':

He learned how to be black. He had to talk differently. The food and music were new. He was introduced to a new way of shaking hands — grabbing the thumbs, hands at an angle, then kind of snapping each other's fingers as you pull away. He started peppering his conversations with "brother" and "sister."

The fact that Boise actually was black didn't help. Up till then, he didn't know it. At birth, he was adopted by white parents who thought he was Native American. ...

Boise, Syracuse University's new law school dean, grew up in a white family, in an all-white farming community, unaware he was black. His unique experience of having lived in two worlds makes him a better dean, he said.

Boise jokes that his upbringing was akin to that of Steve Martin's character in the movie "The Jerk." "I was the opposite," he said. "I grew up a poor white boy."

His biological mother gave Boise up for adoption shortly after he was born in 1963. She placed him at a children's home in the Kansas City area. A month later, the home told Boise's adoptive parents he was Native American. His white birth mother didn't tell officials at the home that his father was black. "She was afraid that if she told them I had a black father that I wouldn't be adopted," Boise said.

His adoptive mother's relatives were farmers and ranchers in Kansas and Nebraska. He spent his summers during high school riding horses, branding cattle and fixing fence. He learned how to cut and bale hay and cultivate corn.

As a Kansas City cop from 1986 to 1991, Boise realized the truth, he said. "I picked up on the nuances" of watching his fellow black officers, he said. His suspicions would be confirmed a few years later when he tracked down his birth mother.

It's only one unusual bit about Boise's background. You might never meet someone with a more diverse life behind him. He's a former Kansas City cop, a classical pianist, an accomplished sailor, and a salsa dancer.

"A modern renaissance man," said Gerald Korngold, a law professor at New York Law School. Korngold was dean of Case Western's law school in 2003 when he hired Boise for his first job as a law professor. ...

In law school from 1991 through 1994, Boise found a niche that most people would run from. He became enamored with tax law. "Tax has its own sort of internal logic that made sense to me," he said. "Understanding how to work within that environment really appealed to me. It was completely something I didn't expect to be doing."

He landed jobs as a tax lawyer at big firms in New York City and Cleveland from 1995 to 2003. Before that, he clerked for a federal appeals court judge in Kansas City.

In 2009, Boise took a job as director of the tax graduate program at DePaul's law school, where he chaired a faculty recruitment committee.

"There was a lot of managing of personalities and different agendas," said Deborah Teurkheimer, a DePaul law professor who was on the committee with him. "He was a cool cucumber." Boise's mild manner stands out in Turkheimer's memory. He speaks so softly that the listener has to lean in to catch what he's saying. He likes that people have to quiet down to hear what he's saying.

"He goes about achieving his goals in just a very low-key, pleasant way," Turkheimer said. "He's a real inspiration in that way — for those of us who like to get things done in the world without making a whole lot of noise."

Along the way, racial issues would crop up. Boise was in a unique position to chime in with his soft voice, having lived on both sides of the color line. His unusual background taught him the importance of seeing issues from the other's perspective, he said. "My background brings credibility to conversations about race," he said. ...

He identifies as black. But he doesn't think it really matters. "I'm just a guy," he said.

Boise has been innovative in his previous law school jobs, according to his colleagues. While he was dean of the Cleveland Marshall Law School at Cleveland State, Boise realized what few other deans did, according to law professor Kevin O'Neill.

Boise foresaw a serious downturn in the number of people seeking to become lawyers. It's become the biggest hurdle for law schools across the country over the past five or six years. "He acted to protect our school long before other deans knew what hit them," O'Neill said.

The new dean of Syracuse University's law school knows firsthand the value of including more people from diverse backgrounds. Craig Boise's upbringing in a white family in Missouri, not realizing he was black, gave him an unusual perspective.

That's what's motivated one of his goals at Syracuse: more minority students and faculty. Minorities make up 19.7 percent of the students at the school, according to SU officials. Boise doesn't have a number he's shooting for. He only knows it has to get higher.

"When I say diversity, I mean diversity in every way," Boise said in an interview with Syracuse.com. "Diversity of political thought, race, sexual orientation, the increasing number of international students."

The purpose isn't to satisfy an image. It's to broaden every student's understanding of the world, Boise said. "What I want to do is foster a sense of recognizing that there's strength in our differences," he said. He prefers to call it inclusion, because "diversity" has become a loaded word, he said.

Boise also wants to diversify the law school's faculty and staff. That might take a little more work in the hiring process, he said. "If there's a vacant position, it should be front and center in your mind - diversity," he said. "That sometimes takes extra effort — more advertising, more research." ...

With law schools in crisis mode, Boise considers stabilizing the school financially one of his top priorities at SU. "There are far fewer jobs, lower salaries," he said. Law schools have responded by getting smaller, and that's affected their revenue.

SU's law school used to get about 250 students in its incoming class. Two years ago, it dropped to 170. It went up to 185 last year and 215 this year — a likely result of the basketball teams' trips to the Final Four, Boise said.

Boise, 53, has plans for maintaining or increasing the school's revenues. He's starting a master's of legal studies degree for people who want to become educated in the law but don't need a law degree.

The degree is for someone like a compliance officer for a big company. They don't need to practice law, only to understand it to better to do their jobs. Companies have to comply with environmental laws or other regulations. They have a growing need for someone who can tackle those issues.

Who are the "best teachers?" Double Yale grads who maybe clerked for a year before entering the profession? Triple Harvard grads with a social sciences PhD who have never practiced? Give me a break.

Forget diversity. Merit counts. Get the best teachers, who will produce better candidate to pass the bar and be better lawyers and in turn attract a larger pool of capable students.