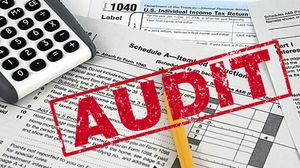 U.S. tax audits of individuals declined for the fifth straight year in 2016 to reach the lowest level since 2003, showing the effects of budget cuts at the Internal Revenue Service.

The IRS, which has lost 30% of its enforcement staffing since the 2010 peak, audited 0.7% of tax returns in the fiscal year that ended Sept. 30, according to preliminary data released Wednesday. That means the IRS audited roughly 1 in every 143 individual tax returns, down from 1 in 90 back in 2010.

Audits declined even for the high-income households that have been an enforcement priority for the IRS. In 2016, the agency audited 5.83% of returns with income over $1 million, down from 9.55% in 2015 and marking the lowest audit rate for that income group since 2008.

The IRS is nothing more than the collections muscle for the Federal Reserve. Bunch of criminal thugs.

Mr. MM: What, exactly would be the motivation for "plead[ing] poverty as an excuse to release the latest data?" Do you think the employees get to keep any budget surplus? Childish.

I might be concerned if the tax gap grew at the same time, but so far there's been no update on it from the IRS. Wouldn't put it past the agency to plead poverty as an excuse not to release the latest data...

These low audit rates are a feature, not a bug, to the GOP