Will Donald Trump Finally End The 100 Year War Over The Estate Tax? 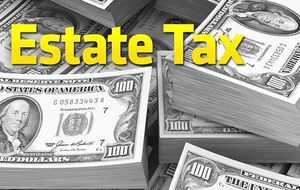 The Hill op-ed: Trump vs. the Democrats: Is This the End of the 100-Year War over the Estate Tax?, by Darren T. Case (Tiffany & Bosco, Phoenix):

[The] 45th President of the United States will soon embark upon his descent into the battlefield on Capitol Hill to potentially end a century long war regarding the estate tax. Standing in opposition to Donald Trump’s political army, presently in firm control of the Executive and Legislative branches, is a Democratic Party that was severely wounded by the 2016 election. With the morale amongst Democrats arguably being at an all-time low, many may assume that the white flag will be raised in regard to the so-called “death tax.”

However, considering what is at stake while we’re in the midst of the greatest wealth transfer in human history, with over $30 trillion dollars set to transfer over the next few decades, and with the estate tax believed by some to be one of the most quintessential weapons against the growing wealth inequality in the United States, it would be foolish to assume that the Democrats will not attempt to go down fighting with vigor and valor. For a nation essentially founded upon a war over taxation, ultimately ending in 1776, perhaps this final battle over the estate tax should come as no surprise. ...

Throughout its 100 year history, liberal economists and academics have published considerable amounts of analysis arguing in favor of the estate tax, especially in regard to the economic principle of inequality.  Economic inequality, generally defined as the difference found in various measures of economic well-being, is believed by liberal schools of thought to be one of the greatest economic ills plaguing fairness in American society.  A recent work on the topic of the estate tax and inequality is that of Pepperdine University School of Law Professor and Editor of the most popular tax law blog on the Internet, Paul L. Caron, and Boston College Law School Professor James Repetti.

Their 2013 Pepperdine Law Review article titled Occupy the Tax Code: Using the Estate Tax to Reduce Inequality and Spur Economic Growth, [40 Pepp. L. Rev. 1255 (2013),] argues that we should care about the increase in wealth inequality in the U.S., believing that it “contributes to a variety of adverse social consequences that persist across generations.”  Caron and Repetti conclude their article by arguing that “the estate tax is a particularly apt vehicle to reduce inequality because inheritances are a major source of wealth among the rich, and studies suggest that inherited wealth has a more deleterious impact on economic growth than inequality caused by self-made wealth.”  While Caron and Repetti stay focused on the law and economics relating to the estate tax and inequality, prior prominent scholars were less restrained. ...

The Republicans seeking to repeal the estate tax believe it will be one of the final components to stir economic growth to unprecedented levels and “Make America Great Again.”  The Democrats seeking to maintain the estate tax believe it is vital to protecting American society from the adverse consequences believed to be associated with the undisputed growing inequality of wealth in the U.S.  Now with the one hundred year philosophical and economic war over the estate tax potentially coming to an end, with one side almost certain to become victorious, perhaps it is fitting to close with a quote on humility from one of our nation’s wartime presidents in Dwight D. Eisenhower: “Humility must always be the portion of any man who receives acclaim earned in blood of his followers and sacrifices of his friends.”  Perhaps the final resolution in 2017 will bring The Chance for Peace over the estate tax, which is long overdue.

If our estate tax is repealed it may lay at rest for a while and probably will. Estate taxation has been in retreat worldwide for decades. But three times previously the United States has had death taxes (inspired by the need for revenue in connection with (i) the threat of war with France in the late 18th Century; (ii) our Civil War; and, (iii) the Spanish American War. Each of these taxes was effective only for a short time and each was succeeded by a later death tax. Who can say a repealed estate tax may not re-appear. Sometimes these things take a while but things that look dead have a way of coming back to life. We are now find ourselves debating more than estate taxes: we are actually debating tariffs again!

If the estate tax is repealed inheritances will be taxed in other ways, such as by repeal of stepped up basis for large estates. Flat elimination of all inheritance taxation will not happen.

Caron and Repetti conclude their article by arguing that “the estate tax is a particularly apt vehicle to reduce inequality because inheritances are a major source of wealth among the rich, and studies suggest that inherited wealth has a more deleterious impact on economic growth than inequality caused by self-made wealth.”

I hate to keep beating this carcass, but I cannot get my head around how allowing the government to confiscate wealth helps anybody, except government clerks.