The Role Of State And Local Taxes In Income Inequality

Institute on Taxation and Economic Policy, Fairness Matters: A Chart Book on Who Pays State and Local Taxes:

There is significant room for improvement in state and local tax codes. Income tax laws are filled with top-heavy exemptions and deductions. Sales tax bases are too narrow and need updating. And overall tax collections are often inadequate in the short-run and unsustainable in the long-run. In this light, the growing interest in tax reform among state lawmakers across the country is welcome news.

Too often, however, would-be tax reformers have proposed policy changes that would worsen one of the most undesirable features of state and local tax systems: their lopsided impact on taxpayers at varying income levels. Nationwide, the bottom 20 percent of earners pay 10.9 percent of their income in state and local taxes each year. Middle-income families pay a slightly lower 9.4 percent average rate. But the top 1 percent of earners pay just 5.4 percent of their income in such taxes. This is the definition of regressive, upside-down tax policy. 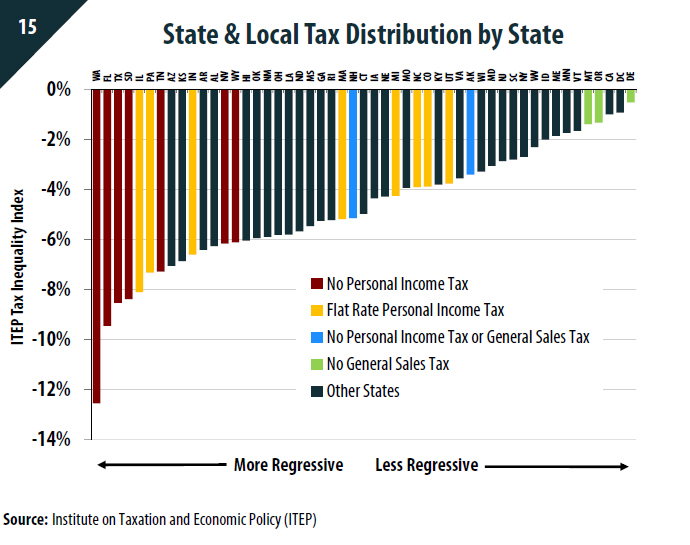 State and local tax systems add to the nation’s growing income inequality problem when they capture a greater share of income from low- or moderate income taxpayers. Further, state tax systems that ask the most of families with the least are not well-suited to generate the revenues needed to fund schools, health care, infrastructure, and other public services that are crucial to building thriving communities. This problem is particularly acute in the long run since regressive tax systems depend more heavily on low-income families that face stagnating incomes while taxing the superrich, whose wealth and incomes continue to grow, at lower rates.

As the information in this chart book helps illustrate, it does not have to be this way. States vary considerably in the fairness of their tax codes, and pursuing policies adopted by states with the least regressive tax systems is a proven strategy for reducing tax inequity.

And contrary to claims that everybody pays a “fair share” under sales and excise taxes, states relying heavily on these taxes to fund government tend to fare poorly in terms of the distribution of their tax systems. As this chart book shows, middle- and low-income taxpayers typically pay more tax on what they buy (sales and excise taxes) than on what they earn (income taxes), though many families may fail to notice this fact since the sales taxes they pay are spread out over countless purchases made throughout the year.

When states shy away from personal income taxes in favor of higher sales and excise taxes, high-income taxpayers benefit at the expense of low- and moderate-income families who often face above-average tax rates to pick up the slack. This chart book demonstrates this basic reality by examining the distribution of taxes in states that have pursued these types of policies. Given the detrimental impact that regressive tax policies have on economic opportunity, income inequality, revenue adequacy, and long-run revenue sustainability, tax reform proponents should look to the least regressive, rather than most regressive, states in crafting their proposals.

As a FL resident, I can tell you that the tax system isn't particularly regressive or difficult to bear. It's basically a tax on tourism related activities. The cost of living here is generally so low that sales tax, gas tax and hotel tax aren't exactly crushing burdens. Besides a bunch of out-of-state leftists I met in law school, pretty much no one in the state wants to institute an income tax because it would only succeed in massively increasing the cost of doing business here.

Supposedly oppressive taxation destinations FL and TX represent prime destinations for businesses fleeing the paradises of fair taxation known as NY and CA. If "regressive" taxation schemes are so harmful, why are the states that have them doing so well and why is the cost of living so low in many of these states?