The 25 Most Influential People In Legal Education (2016) 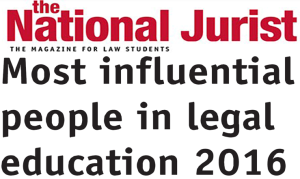 This year's list of the Most Influential People in Legal Education recognizes leaders who are shaping the future of law schools. ... As in years past, we sought nominations from U.S. law schools, narrowed the list to 46 names and then asked the law dean and one randomly selected faculty member from each school to rate the influence of the nominees.

I am delighted that four of the Most Influential People in Legal Education (2016) blog in our Law Professor Blogs Network.

Great work! Looks like they changed the format - it would be cool to see what everyone was up to since last year.

Congratulations on maintaining the #3 spot!