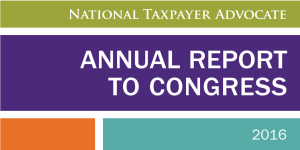 In assessing the compliance burdens of the current tax code, the Taxpayer Advocate Service (TAS) analyzed IRS data and determined that individuals and businesses spend about six billion hours a year complying with the code’s filing requirements – not including the millions of additional hours spent responding to IRS audits or notices.  “If tax compliance were an industry, it would be one of the largest in the United States,” the report says.  “To consume six billion hours, the ‘tax industry’ requires the equivalent of three million full-time workers.”