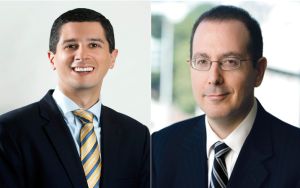 Bloomberg is reporting that Alex Brill (Research Fellow, American Enterprise Institute) and David M. Schizer (Dean Emeritus and Harvey R. Miller Professor of Law and Economics, Columbia Law School) have been interviewed by the Trump transition team for the position of Assistant Secretary of the Treasury for Tax Policy.

Alex Brill is a research fellow at the American Enterprise Institute (AEI), where he studies the impact of tax policy on the US economy as well as the fiscal, economic, and political consequences of tax, budget, health care, retirement security, and trade policies. He also works on health care reform, pharmaceutical spending and drug innovation, and unemployment insurance reform. Brill is the author of a pro-growth proposal to reduce the corporate tax rate to 25 percent, and “The Real Tax Burden: More than Dollars and Cents” (2011), coauthored with Alan D. Viard. He has testified numerous times before Congress on tax policy, labor markets and unemployment insurance, Social Security reform, fiscal stimulus.

Brill has an M.A. in mathematical finance from Boston University and a B.A. in economics from Tufts University.

David M. Schizer is Dean Emeritus and Harvey R. Miller Professor of Law and Economics at Columbia Law School. He is one of the nation’s leading tax law scholars, whose research also focuses on energy law and corporate governance issues. He is co-director of the Richard Paul Richman Center for Business, Law, and Public Policy; co-director of the Charles Evans Gerber Transactional Studies Center; and co-director of the Center for Israeli Legal Studies.

Schizer served as dean of the Law School from 2004 to 2014. When he began as dean at age 35, Schizer was the youngest dean to serve the Law School in its history. He recruited 43 new faculty members, added a ninth floor to the main Law School building, and led a $353-million capital campaign—a substantial increase over the Law School’s prior $150-million campaign.

In seven of his 10 years as dean, the Law School raised more than twice as much money as it was raising annually before his tenure as dean began. He forged a close relationship with Columbia Business School, including a J.D./M.B.A. program (awarding both degrees in three years), as well as a joint research center that he now co-directs. Schizer promoted innovation in the upper-year curriculum and strengthened support for work in government and public interest organizations.

He stewarded the Law School through challenging economic times, working personally on behalf of students to ensure that their employment opportunities remained comparable to those of previous generations. Schizer was the first dean to serve under a 10-year term limit, enacted by faculty in 1971.

Surprising to the mentally enslaved.

There are, uh, surprisingly solid choices . . .