WSJ:  Taxes Under Trump—Almost Everyone Pays Less, The Richest Pay A Lot Less

Steven Mnuchin, the likely next Treasury secretary, this week said rich U.S. taxpayers won’t get “an absolute tax cut” under President-elect Donald Trump. But that is not what Mr. Trump says in his taxation plan. In fact, under his approach the wealthy would receive an average tax cut of about $215,000 per household, experts say.

In Mr. Trump’s plan, Americans in different income ranges would divide up several hundred billion dollars of revenue cuts for 2017. As a result, Americans would, on average, receive a lower tax bill for 2017 compared with current law.

The top 1% will benefit, as they would contribute a smaller percentage of total tax revenue under Mr. Trump than they do now. The group, which consists of about 1.1 million households and earns 17% of total income, would owe 25% of federal taxes for 2017 under Trump’s plan compared with 28.7% under current law.

Mr. Mnuchin said these high-income households won’t get an “absolute” cut, because reductions for high earners “will be offset by less deductions.” Notably, Mr. Trump’s tax plan currently limits “itemized” deductions on Schedule A, such as those for mortgage interest, charitable donations, and state taxes, to a maximum of $200,000 per couple and half that for singles. But these limits don’t fully offset the effects of income- and estate-tax cuts for high earners proposed by Mr. Trump, according to experts. 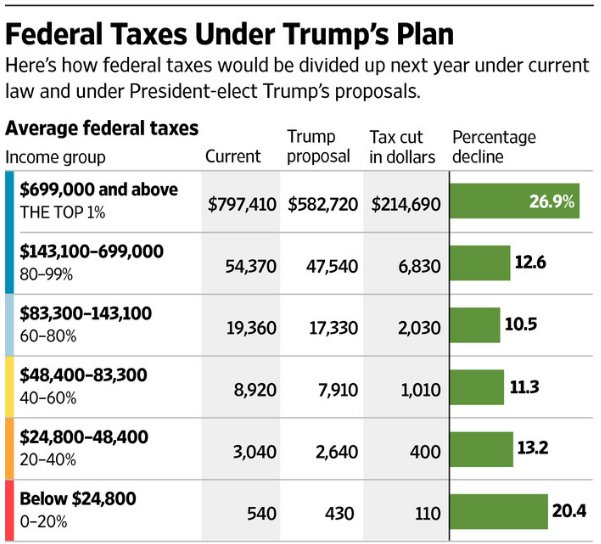 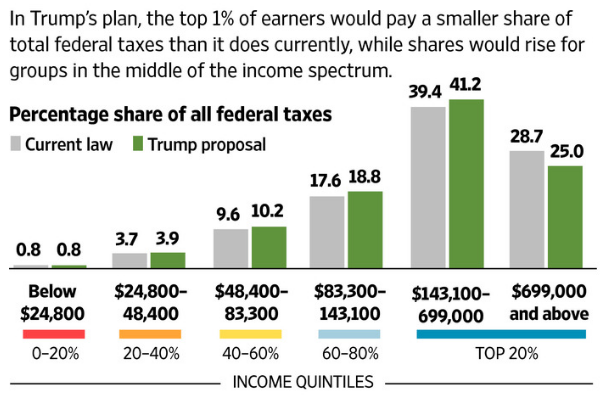 “Trump’s current plan doesn’t identify sufficient offsets for high earners to pay for their rate reductions,” says Eugene Steuerle, an economist with the nonpartisan Tax Policy Center in Washington who as a member of Ronald Reagan’s administration helped formulate the major tax reform of 1986.

By chance, what is the effective corporate tax rate for large and small firms in the U.S.?

"To talk about tax rates without consideration of the standard deduction, exemptions, and other credits is a farce. "

How can you cut taxes for someone who does not have any tax to pay?

Folks making around $9,500/ year likely do not have any tax liability by the function of the standard deduction and personal exemption.

To talk about tax rates without consideration of the standard deduction, exemptions, and other credits is a farce. Lower income families / individuals benefit the most from these mechanisms, purposefully in some cases, compared to other tax payers simply due to their reduced income to be taxed (and therefore lower tax liabilities).

It's funny: the current lowest marginal tax rate is 10%, for folk making around $9,500/year or less. Just listened to Paul Ryan on 60 Minutes; he said that he wants the lowest marginal rate to be 15%. So much for that tax cut for the poor.

If he really gives the poor a 20 percent cut, they won't care if the rich get 25 percent.