The American Dream Is Collapsing For Young Adults

Rising income inequality has eroded the ability for American children to grow up to earn more than their parents, according to a new study from a team of researchers that could carry deep implications for President-elect Donald Trump's policy agenda.

The research from a group led by Stanford's Raj Chetty, and also including economists and sociologists from Harvard and the University of California at Berkeley, estimates that only half the children born in the 1980s grew up to earn more than their parents did, after adjusting for inflation. That's a drop from 92 percent of children born in 1940. 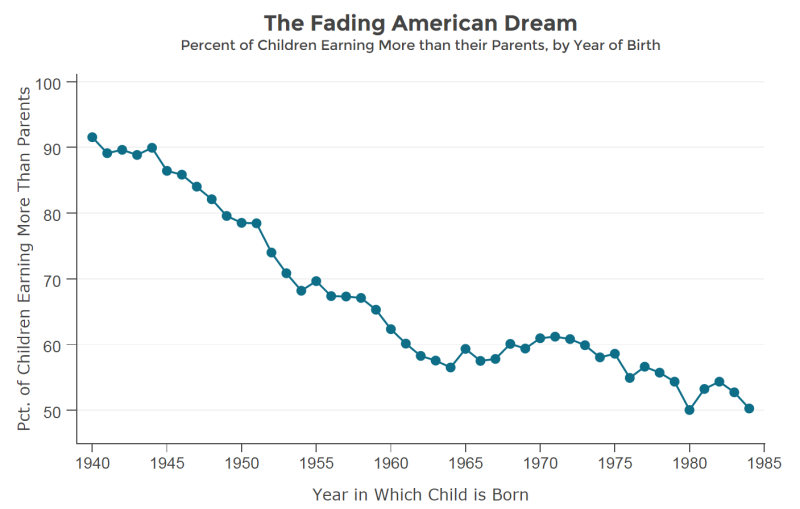 The fall-off is particularly steep among children born in the middle class, and for those born in several states in the industrial Midwest.

Previously, Chetty's team studied a different measure of mobility: the ability of children to move up or down America's income ladder as they grow up, when compared to other Americans. The new research attempts, for the first time, to quantify so-called "absolute mobility," which people often associate with the American Dream: the odds of a child earning more as an adult than his or her parents earned at the same age.

The researchers say rising concentration of income among the richest Americans explains 70 percent of what has been a steady decline in absolute mobility from the baby boom generation to millennials, while a slowdown in economic growth explains just 30 percent. ...

That finding suggests Trump's tax-cut plans would do little to improve economic mobility for struggling blue-collar families, even if they help accelerate growth, unless they are somehow able to deliver growth that is much more broadly shared by workers of all income levels. Independent analysts, though, predict the tax plans pushed by Trump in the campaign, and by Republicans in Congress, would benefit high earners disproportionately.

Trump did not make inequality a focus of his presidential campaign, but he appealed directly to the anxieties of workers who feel the economy is not delivering for them in the same way it did for their parents. The paper highlights several sources of those anxieties in the Trump coalition

It finds barely 2 in 5 men born in the mid-80s grew up to earn as much, at age 30, as their father's did at the same age. It shows average rates of mobility falling particularly fast in Rust Belt states, most notably Michigan and Indiana. And it finds a much steeper drop in absolute mobility for the middle class than for the poor.

The calculations come from a novel approach by the authors to marry data from anonymous tax records and detailed statistics on the distribution of income in the United States from the Census. Using those sources, the authors estimate the chances that a particular child will grow up to earn more than her or his parents. The large decline in the past half-century remains steady even if they change how they calculate inflation over time, or take into account demographic shifts such as the changing size of U.S. households over time.

My question on this research is how immigrants are dealt with. I think the 44 million foreign-born in US better off than their parents. The same is likely true for 20 million adults in U.S. who are children of foreign-born. These 64 million usually have incomes lower than US average (though higher than the countries they immigrated from). Do their incomes pull down average incomes of young people, making it seem that those born here of parents born here are worse off? (Of course, I could be actually researching to find out, but instead am just commenting.)

Their crappy life is the just reward of their and their parents' liberalism.

After-tax, after transfers, total compensation. Because of the same reason.

This seems like a pretty silly study. Rising income inequality might be a result of the limits to the "American Dream", but it is not a cause. If you want to look at the declining income of Middle Class America, you can consider globalization, automation, and difficulties getting the skills necessary for that first job. But, never is income inequality anything but a result.

Pareto or 80/20 will probably come in to play now that the depression effect is over.

I wonder if the baseline will be Parento principle.

Every time there's an article about inequality, I always look for the most important caveat in the methodology. Again, I don't see where it's even discussed: Are we talking about after-tax cash income only or TOTAL COMPENSATION? Because that distinction makes a world of difference when you're trying to compare things across 5 decades and several generations...

If you want your children to earn more than you the solution is obvious: Have more children!