“This is potentially a cataclysmic event for legal education. The Department of Education’s reasoning could easily be extended to other law schools,” Paul Caron, an associate dean and professor at Pepperdine School of Law, wrote in an email to the ABA Journal. “Hopefully, today’s action by the DOE will finally cause law schools to confront the existential crisis facing legal education,” says Caron, who writes at Tax Law Prof Blog.

Charlotte School of Law may be on the brink of closure, which, as I have argued, would be the just result for a school that continues to exploit students.

On Monday, the U.S. Department of Education announced it will end Charlotte School of Law’s access to federal student financial aid, also known as Title IV funds. As a result, students who plan to enroll next semester, which begins Jan 9, 2017, can no longer receive federal student loans.

Charlotte Law is among several dozen law schools that my organization, Law School Transparency, identified as using; exploitative admissions and retention policies. We argue these schools adopted such policies to maintain the flow of tuition dollars, usually paid for with federal student loans.

Charlotte School of Law is not the only law school operating shamelessly to the detriment of the legal profession. This school, like several dozen more, set large percentages of their students up to fail, leaving them with high debts, wasted time, no job, and no hope. It’s long past time for these schools to go.

The ABA put Charlotte School of Law on probation last month. Monday, the feds came down even harder on the state’s largest and arguably (#notarguably) least successful law school. ...

The site also noted what appeared to be the last straw for the feds. In an interview with the Charlotte Business Journal three weeks ago — two weeks after the ABA dinged the school for its lousy bar passage rates — the school's president claimed that its grads were actually doing pretty well on the state bar exams. Whoops! Turns out CSL’s passing rate was below state average more often than not. In the last four seatings of the bar, fewer than half of CSL grads passed.

Law School Transparency has more gory details about Charlotte Law — a 46 percent bar passage rate in 2015 (it was a point lower in 2016); only about a quarter of its grads in full-time, long-term legal jobs; a third of its graduates didn’t have full-time jobs; and so on. It’s ugly.

The law school’s website, meanwhile, is silent on the recent troubles. So is the school's Twitter feed, which includes a picture of a Christmas tree made out of law school books. 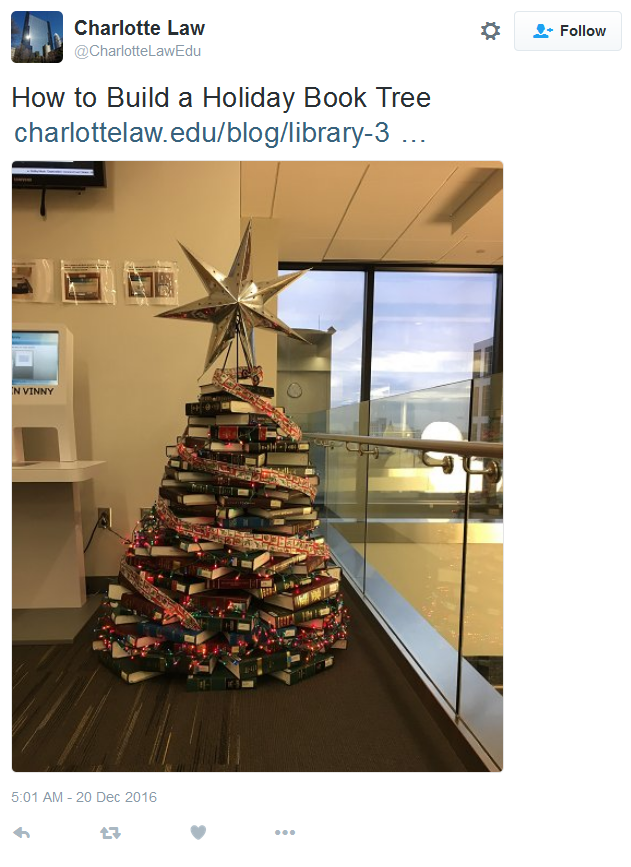 Considering that the school probably won’t be in business after the New Year, that’s probably the best use of law books short of boxing them up.

"My point is simlpy that the DOE has provided zero deference to the ABA as an accrediting agency."

Au contraire: just a few months ago, NACIQI, the reviewer of accreditors, recommended to the DOE that the ABA be stripped of its accreditation powers altogether (for years of absentee accrediting). The DOE ignored it and allowed the ABA to remain accreditor of law schools. I daresay that's perhaps more deference than it deserves.

Lawprof, I, too, am proud of the DOE for exercising their authority to hold education providers accountable. My point is that the ABA's probation / remediation plan has proven itself not just inadequate to protect Charlotte (and it's students, alums, faculty, etc.) but completely and totally inconsequential. The DOE literally disregarded it. I have no doubt that Charlotte (and especially their administration) spent hundreds, if not thousands, of hours preparing for ABA meetings, conferences, hearings, audits and briefings on the matter that ultimately led to their probation. And assuming that Charlotte was prepared to make a good faith (and successful) effort to conform to ABA standards as well as pay penance to the bar in the form of public shaming/notifications on their website in an other communication, the reward for their planning and efforts is for the DOE to complete disregard them.

My point is simply that the DOE has provided zero deference to the ABA as an accrediting agency. All law schools should take note that their great governing body, through multi-decades of inaction and a lack of enforcement, has become a mere mirage of standards and authority such that even the DOE refuses to give credence to their governing / enforcement.

This action is shameful. Has anyone considered the impact on all the graduates who graduated, passed the bar and are currently employed in the legal profession.. They are being punished also and have probably taken down their diploma.

Proud of the ABA and proud of the DOE. Schools like Charlotte need to be stopped. They've taken advantage or far too many students.

The ABA ought to be ashamed of themselves. The DOE has handed down the functional "death penalty" for Charlotte - or any school attempting to operate on an ABA-accredited scale. The ABA placed Charlotte on probation less than 40 days ago and provided a multi-year path to rehabilitation for Charlotte. DOE's actions clearly indicate that they had no faith that the ABA's sanctions would adequately protect law students as they gave essentially zero opportunity for Charlotte to comply with them. The ABA's relational function to laws school is to accredit and provide support/service to them. In this case, the ABA provided such startling inadequate service to Charlotte that, while it did not fire the fatal shot, it certainly handed the DOE the fateful gun and set it squarely aimed to the target.

The ABA ought to have protected Charlotte, and other law schools similarly situated, by providing enforcement measures and remediation plans to schools long, long before the DOE would think pull Title IV funding.

This is a clear example of the DOE telling the ABA that it is unfit to accredit schools and that it's accrediting authority is provided no (or essentially no) deference.