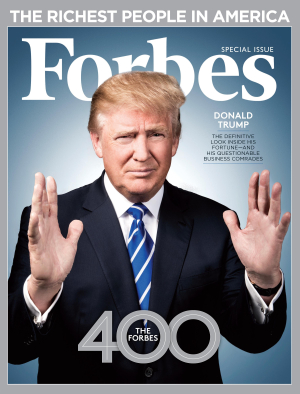 For the final time, the IRS has released its annual analysis of the richest 400 American taxpayers (The 400 Individual Income Tax Returns Reporting the Largest Adjusted Gross Incomes Each Year, 1992–2014):

This release contains four tables which contain information from the Top 400 Individual Income Tax Returns for each of Tax Years 1992 through 2014. Table 1 contains frequencies, money amounts, and average dollar amounts for the major income, deduction, and tax credits reported as part of the Form 1040 (U.S. Individual Income Tax Return). Table 2 shows ranges of marginal tax rate for the various statutory rates (including the alternative minimum tax rates) that were in effect for Tax Years 1992 through 2014 while Table 3 shows the range of average tax rates up to 35 percent and over, computed as total income tax divided by adjusted gross income.

The data in Tables 1–3 are based on the individual returns with the largest adjusted gross income reported each specific year shown and do not necessarily reflect the same taxpayers over the 23-year time period reflected. Therefore, Table 4 is available to present the number of times an individual return appeared among the 400 largest adjusted gross incomes for each of tax years 1992 through 2014.

Beginning with Tax Tear 2014, the annual October release of Individual Income Tax Return percentile data now includes a new table (Table 3) that contains all of the item content found in the top 400 data release. In addition, this new table shows data at the .001 percentile level—which in 2014 represented the top 1,396 returns. This is a more analytically useful tabulation compared to the top 400 tabulation in that it provides a longitudinally consistent data point relative to the entire percentile distribution.  As the number of returns increases with the growth of the economy, the number of returns in the .001 percentile will increase proportionally as well thus allowing for a consistent high-income data series.

As a consequence, the top 400 data series will be discontinued after Tax Year 2014. 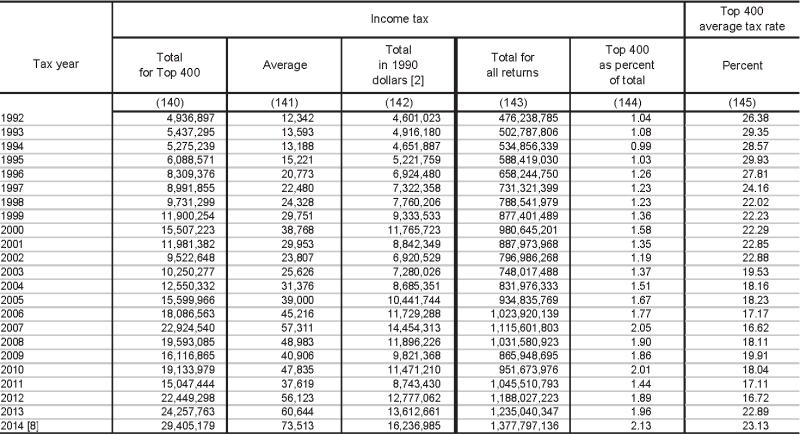 Wall Street Journal, The Really Rich Got Richer, According to IRS’s Top 400:

The total income reported on the top 400 individual tax returns rose 20% in 2014, according to Internal Revenue Service data released Thursday.

The figures reveal the concentration of earnings at the pinnacle of the income distribution, in a club that required $126.8 million of adjusted gross income to enter. That group, out of nearly 150 million tax returns in 2014, received 1.3% of income and 10% of capital gains that get preferential rates. The same 400 households also made 6.9% of all charitable contributions. 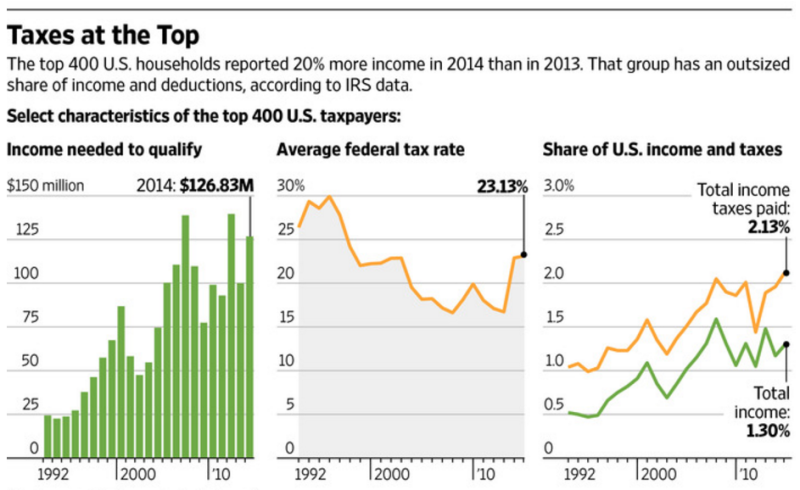 The top 400 households paid 2.13% of all individual income taxes, their highest share in the data series that goes back to 1992. Their average tax rate was 23.13%, the highest since 1997, when Congress cut capital-gains taxes. ...