Freshman Drops Out Of Kansas State With 4.0 GPA, Says College Is A Scam Because Students Learn Quadratic Equations, Not Taxes 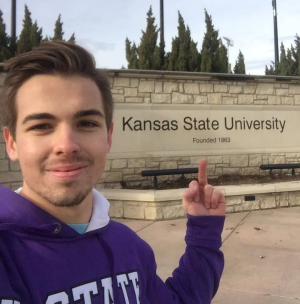 Inside Higher Ed, Giving the Finger to K-State and General Education:

Billy Willson finished his first (and his last) semester at Kansas State University this week -- and in so doing has set off a debate there and beyond on the value of college and of general education in particular.

In a Facebook post, he announced that he was dropping out, despite having earned a 4.0 grade point average. He said that he would start his own business and learn more from that experience than anything he could hope to achieve at Kansas State or any college. He ran a photo of himself giving the finger to Kansas State, although he's since said he really wants to be doing that to all of higher education. ...

"YOU ARE BEING SCAMMED," Willson wrote on Facebook. (The wording, grammar and capitalization quoted here and later in this story are verbatim from Willson's and others' social media posts.) "You may not see it today or tomorrow, but you will see it some day. Heck you may have already seen it if you've been through college. You are being put thousands into debt to learn things you will never even use. Wasting 4 years of your life to be stuck at a paycheck that grows slower than the rate of inflation. Paying $200 for a $6 textbook. Being taught by teacher's who have never done what they're teaching. Average income has increased 5x over the last 40 years while cost of college has increased 18x. You're spending thousands of dollars to learn information you won't ever even use just to get a piece of paper." 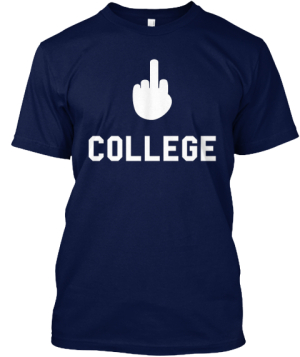 He added: "Colleges are REQUIRING people to spend money taking gen. ed. courses to learn about the quadratic formula (and other shit they will never use) when they could be giving classes on MARRIAGE and HOW TO DO YOUR TAXES."

Willson had been studying architectural engineering -- and now is pursuing the path of starting his own business. His first venture is selling T-shirts that express his views about college (an image of someone giving the finger on top of the word "college").

From the young man's post: "Being taught by teacher's..." I hope he won't need to know grammar and spelling in his business!

Meritocracy’s losers: No degree, no respect: "Some countries — Singapore, Switzerland, Germany — offer high-quality career and technical education linked to apprenticeships and jobs.... The U.S. pushed a 'bachelor degree or bust' strategy, writes Petrilli. 'The number of bachelor degrees has increased a bit, but the size of the "bust" is much, much larger.'"

I'm reminded of Bluto's remark near the end of Animal House: "Seven years of college down the drain." But, that can occur with a degree when university administrations and faculty focus on themselves rather than their customers.

I've had better luck with employees who graduated from trade schools, which teach what businesses need, than with employees who had Master's in Taxation from major universities, where students are taught theory by professors who never prepared a tax return in their lives. Diplomas have become pieces of paper which indicate that the holders spent a lot of money, attended classes, and were able to repeat inexperienced words and activist political positions on test papers.

The kid has a point, and college administrations and professors who don't wake up and make college more practical and affordable are as clueless as leaders of a certain political group currently blaming the great unwashed for not supporting them. Quit leaving training up to hiring companies or forcing self-starters to learn on their own. Today's colleges have isolated themselves so much from reality that they make Trump University look good in comparison.

The entire story sounds like a scam to sell the T-shirts. Has anyone verified his story.

well, good luck learning architecture from experience alone, not so much for the people dead under the rubble of the houses he'd build. I agree that he doesn't need a degree for selling t-shirts with crass and simplistic designs tho.

Sounds like he's just looking for attention so he can sell his t-shirts. This is not a news story.

This gentleman enrolled in the wrong institution. He should have applied to the Wichita School for Tax Return Preparers.

His path may not be for everyone, but the points he makes are good ones. Skip college and you avoid a mountain of debt and get a four-year headstart in business.

Just keep in mind that this idea works best if you start you own business. Much of the corporate world won't hire you without college credentials, even if they're worthless in practice.

Indeed, there's a scam going on here. Any school which gives you credit towards graduation for learning quadratic equations is clearly a high school, or possibly a middle school for the gifted & talented. If that school calls itself a "college" then the administrators are telling fibs. At an actual college, the students - in particular the engineering students - would know quadratic equations before they walk through the gates.

As I said over at IHE, this. is. not. a. story. It's some misguided kid who wrote a facebook post. And as several engineers wrote at IHE, quadratic equations are kinda really important to them.