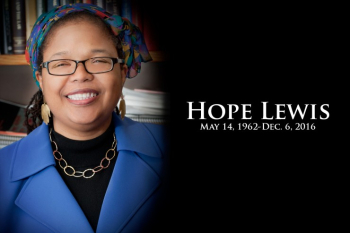 Pro­fessor Hope Lewis, a member of the School of Law’s fac­ulty since 1992, died Tuesday after a long ill­ness. She was 54.

Born on May 14, 1962, Lewis was a grad­uate of the Bronx High School of Sci­ence, Har­vard Col­lege, and Har­vard Law School. A pas­sionate cham­pion of the poor and dis­ad­van­taged, Lewis focused her teaching and schol­arly work on human rights and eco­nomic rights in the global economy. She co-​​founded the law school’s Pro­gram on Human Rights and the Global Economy and served as the fac­ulty director of the law school’s Global Legal Studies program.

An inter­na­tion­ally rec­og­nized legal scholar and com­men­tator on human rights, Lewis authored numerous arti­cles and co-​​authored the sem­inal text­book Human Rights and the Global Mar­ket­place: Eco­nomic, Social, and Cul­tural Dimen­sions. She co-​​drafted and com­piled the Boston Prin­ci­ples on the Eco­nomic, Social, and Cul­tural Rights of Non-​​citizens, a project of the law school’s Pro­gram on Human Rights and the Global Economy. She was a founding co-​​chair of the Amer­ican Society of Inter­na­tional Law’s Inter­na­tional Dis­ability Rights Interest Group and served on the ASIL exec­u­tive council between 2010 and 2013. She also served on the board of gov­er­nors of the Society of Amer­ican Law Teachers and the exec­u­tive com­mittee of the Asso­ci­a­tion of Amer­ican Law Schools Sec­tion on Minority Groups.

She received many awards for her schol­ar­ship, activism, and men­tor­ship as well as her heroism in dealing with blind­ness, the result of the dis­ease that ulti­mately claimed her life.

Lewis always signed her emails, “Peace, Hope.” Though the latter was her name, not an aspi­ra­tion, the com­bi­na­tion always con­veyed some­thing greater than a sig­na­ture line. It was a reflec­tion of her life’s work, her inten­tions, the real­i­ties she con­fronted, and the pos­si­bil­i­ties she imagined.

In 1995, Lewis wrote an op-​​ed for The Boston Globe, titled “The Long Ride Home,” in which she detailed the dif­fi­cul­ties of trying to take a taxi home from the train sta­tion in Boston. “It was 2 o’clock in the morning. My thoughts were far away from class, iden­tity or any­thing but get­ting to sleep in my own bed,” she wrote. But three dri­vers delib­er­ately passed her by in favor of white people. “The sig­nif­i­cance of such events is more pressing and com­plex than just whether well-​​dressed black people can get home by taxi late at night. These events expose the fal­lacy of believing that racism will simply dis­ap­pear once minori­ties attain the right edu­ca­tional status, the right job or the right clothes.”

Lewis wrote many schol­arly arti­cles and a fair number of pieces for the pop­ular press. In all that she did, both with pen and in deed, her goal was to advance social jus­tice. As our com­mu­nity faces the heart­break of losing such an inspiring, kind, warm-​​hearted friend and col­league, we are called to con­tinue the work that was her mis­sion. As Lewis wrote in the Globe about the people who took the cabs that would not take her: “Each expressed sur­prise, looked back guiltily at me, then hopped right in the cab. After all, what could they do? Refuse the ride? Yes. Refuse the ride. None of us should ever forget the role we play in sup­porting injus­tice, even as we just try to make it home.”