Will Nick Saban Sack The IRS In Tax Court? 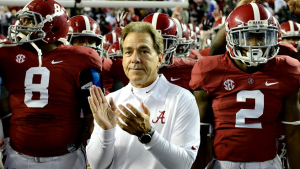 Over the past decade, Saban has created a modern football dynasty at Alabama, with four national titles in seven years and another possibly in the offing as it gears up for the annual showdown with archrival Auburn.

With considerably less fanfare, Saban has also built a business empire off the field, a collection of investments and projects that roughly traces the path of his 40-year career: A strip mall outside East Lansing, Mich. Apartment complexes around Houston, Texas. A pair of small apartment buildings in Baton Rouge, La. An upscale residential development in Tuscaloosa, Ala. And a growing collection of Mercedes-Benz dealerships. ... On a state disclosure form filed in May 2016, Saban listed 23 entities, some with names like Blitzmore LLC and First Down LLC, in which he or his wife, Terry—a licensed real estate professional—hold 5% or more of the stock, or serve as officers. ...

In Baton Rouge, where Saban coached at LSU until 2004, he partnered with developer Joseph “Tommy” Spinosa, who said the two bonded over “a love and a knack for real estate.” Saban was an investor and part-owner in a number of Spinosa’s projects, including two apartment complexes in the Houston area.

Both Texas projects ran into financial trouble, and as of last year Saban is no longer an investor in them. In April 2006, two years after he left LSU for the Miami Dolphins, Saban lent Spinosa $2 million to build Perkins Rowe, a massive mixed-use development in downtown Baton Rouge. Saban and Spinosa also co-owned a company that provided chilled water to the project.

Perkins Rowe was soon embroiled in foreclosure proceedings and overlapping lawsuits. Some of the legal trouble persists. Earlier this year, the Internal Revenue Service said that Mr. Saban’s loan to Perkins Rowe—which in 2008 was converted into an ownership interest in another Spinosa project—had been improperly written off as $2.9 million in uncollectible debt.

The partnership behind the second project, another Baton Rouge mixed-use development called Rouzan, is challenging the IRS finding in tax court. A lawyer for Saban said the coach sold his 15% interest in Rouzan last year.

Spinosa said the ventures suffered from “terrible timing,” having been launched just before the housing crash. He said he and Saban were no longer business partners. “It was great working with him,” Spinosa said. “He’s been getting more sophisticated in his thinking about these things.”

If the Tax Court is anything like SEC referees, Saban will be given forward progress where he needs it.